DECCAN CHRONICLE. | ANUPAMA SUBRAMANIAN
Published Nov 27, 2018, 12:01 am IST
Updated Nov 27, 2018, 12:27 am IST
Rajinikanth is incensed at children being made to beg on the streets by a mafia. He wants the people behind these kids to be punished.

Superstar Rajiniknath took a dig at the system and the way the state is functioning. He had said the ‘system is rotten’ even when he made public his intention of launching a political last year. He once again lashed out on the State and central governments for their lack of initiative towards welfare measures for the children of India.

Speaking at the launch of Peace for Children initiative, a brainchild of his wife Latha through her Sri Dayaa Foundation, Rajini said, “Right from the initial days of our marriage, I have noticed her immense interest in kids and children. She has been nurturing this idea of starting something for the welfare of the children.  After all, children are our priceless treasures and the future of the nation. In fact, they are a happy lot and only we elders spoil their innocence and dignity in one way or the other.”

The Kabali actor went on to add, “In Western and European countries, the governments spend so much of time and money on children and come out with appropriate projects for them. But in India, neither the State nor the central government care about children and they hardly spend any money on children’s welfare measures. It is pathetic. No government is bothered to do anything for children. That’s why my wife took the imitative and started this Peace for children, thus realising her long term goal.”

When there’s no point in depending on government, private patrons like TATA have come forward and supported the cause, as they have understood the seriousness and importance of children’s issues, the 67-year-old actor revealed. Commending Latha’s work, the actor remarked in a lighter vein, “She is doing a great job. A time should come when more than calling ‘Latha as Rajini’s wife, people should say ‘Rajini is Latha’s husband’. 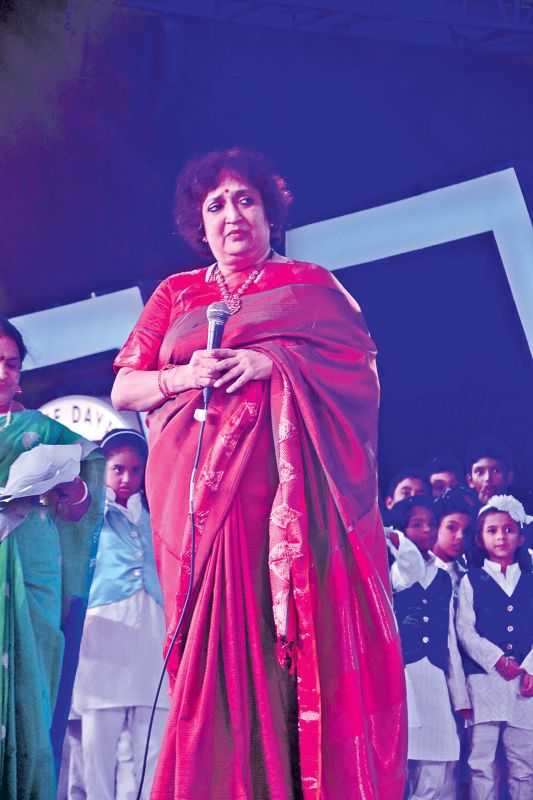 Commenting strongly against those who make children beg on the streets, he said, “We see so many children begging on the streets. How long will it take for a policeman nearby to find out who is behind this heinous act? Everyone, including me, just walk past them without caring too much. There’s a big mafia behind this and those criminals should be given punishment equal to what’s given for a murder convict.”

“This Peace for Children which Latha is opening in each district will help to resolve children’s issues and this should grow into a huge movement,” he concluded.

Latha, addressing the gathering said, “I get my Shakthi from my husband and because of his encouragement and motivation, I am able to do such things like PFC. I thank you so much for being the person you are. I will always be acknowledged as Mrs Rajinikanth and you will always be known as ‘Rajinikanth’.

Latha’s son-in-law Dhanush was all praise for Latha. “Jilluma (that’s how he calls her) is ‘King’s wife’. She can relax and have fun. But she is always active and her concentration is on children’s welfare. Change is required. I am not talking about outside change. We should change from within ourselves. Of late, the world is going into ‘negative space’, even if you do something good, people find fault in that. So, compassion towards other human beings is the only way to overcome this. Only a compassionate heart (Jilluma) can do this. We are so proud of you.”

Earlier, an app with toll free numbers for safety of children where anyone can call and lodge their problems or issues on anything to do with children was launched. Aishwarya R Dhanush, Soundarya Rajini, Anirudh,  Thaanu , Raghava Lawrence, Bobby Simha, Karthick Subbaraaj, S.P Muthuraman, Simran  and actor Selva were spotted on the occasion.