Jallikattu protests: ‘This is a mistake,’ says Kamal Haasan on police crackdown

Kamal also has been in talks with CM Panneerselvam

Mumbai: With police cracking down on pro-Jallikattu supporters, veteran cinema star Kamal Haasan today came out in support of students and youth, saying 'aggressive police action on students' passive resistance will not bear good results" and urged protesters not to resort to violence.

"This is a mistake. Aggressive police action on students passive resistance will not bear good results", Haasan wrote on Twitter.

He also appealed to the students and youth not to resort to violence.

Haasan insisted that the protesters take up the non-violent path and said neither students nor public should resort to violence.

He also expressed concern over violence in Alanganallur, famous for holding the sport.

Kamal also has been in talks with CM Panneerselvam, while also trying to bring PM Narendra Modi's notice to the looming issue. 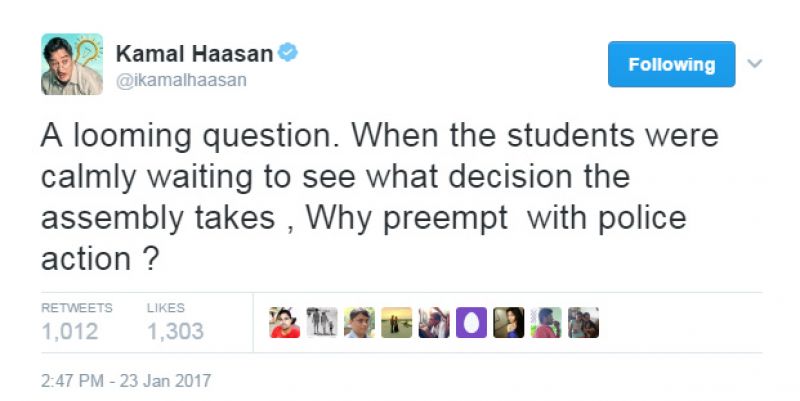 Meanwhile, RJ-actor Balaji requested the protesters to go home, saying the Government promulgating an ordinance in itself was success to the peaceful protests conducted over the last week.

"Instead of celebrating the first success (of making the Government to promulgate an ordinance), why are you venturing into violent protests?", he asked in a video that was widely circulated in the social media.

The protests which were held peacefully over the last week should not end like the way it is turning out now, he said.

"I appeal to the protesting students and public to go home. Protests are over. Please go home." he said.

Police today evicted scores of pro-Jallikattu demonstrators from protest venues across Tamil Nadu, especially from Marina beach, amid incidents of stone-pelting, torching a car and mild lathi-charge at a few places in the city.