Quite a few actresses had evinced an interest to play the iconic actress and political leader J.Jayalalithaa on screen. But it is Nithya Menen who has be chosen to play JJ in the biopic by director Priyadaarshini, a former assistant of Mysshkin who has just announced the title of her first film while wielding the megaphone.

Titled The Iron Lady, the first look of the film through posters was unveiled by AR Murugadoss. Though Priyadaarshini has not officially revealed Nithya’s name, she opened up to DC as to why she preferred the O Kadhal Kanmani actress for the titular role. The film will chronicle Jayalalithaa’s life from her debut movie Vennira Aadai to her last days in hospital. The director also described how she is recreating the sets in the studios of Kodambakkam where Jayalalithaa shot many of her films. 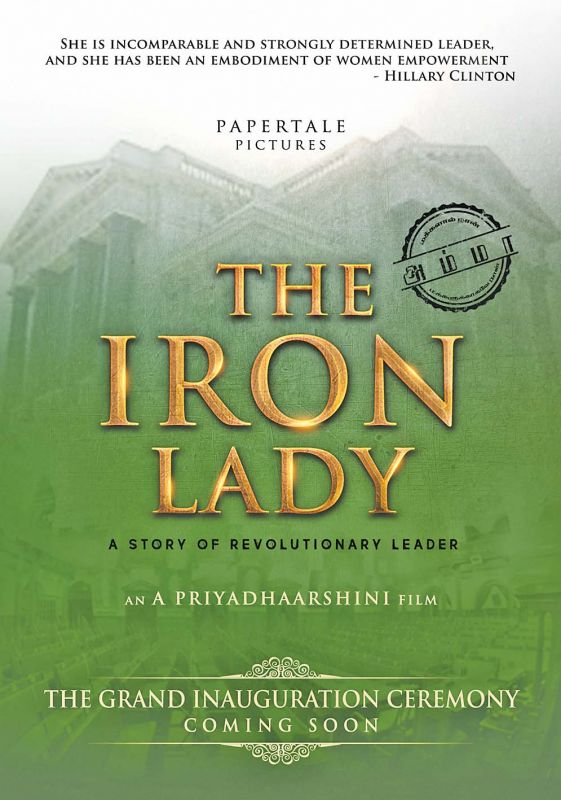 “Right from my young age, I have been inspired by Jayalalithaa madam’s strong personality. My dad (who is no more) was also an ardent follower of Amma. Even, when I cast my first ever vote, I voted for Amma. I have been observing madam’s deeds for a long. Being a woman, my journey of a few years in the film industry has taught me many things. I was wondering what would have Jayalalithaa madam gone through.”

On picking Nithya Menen, she asserts, “Being a ‘star’ actress alone is not a qualification for playing Jaya madam on screen. I wanted an actress who would give a nuanced performance, besides her physique and height matching Amma’s. I felt Nithya Menen would fit the bill. I went to Bengaluru and narrated the script to her and she was too happy to come on board.”

The young filmmaker says that she has done extensive research on the subject. “The movie would reflect the timeline of Jaya madam who lived for 68 years, barring her controversial death which is under probe now. I am planning to recreate the sets in the studios where she had shot those days. Also, discussing with my team to start the film in black and white and then move to colour.” Other cast and technical crew is being worked out. The movie is expected to go on floors on February 24 on Jayalalithaa’s birthday.

One may recall that director Vijay had also announced that he would be making a film on former CM Jayallaithaa and veteran Bharathiraja is also pondering the idea of filming a JJ biopic. The more the merrier it may be, but it does appear Priyadaarshini has a head start as an early mover with a concrete plan.