He described Sathyaraj's act as a ‘self-respectless act done for money.’

Mumbai: Veteran cinema star Kamal Haasan today praised his former colleague Sathyaraj for apologising over the remarks made during the Cauvery crisis, calling him a "great human being".

"Congrats Mr Sathyaraj for maintaining rationality in a troubled environment," he tweeted.

The actor-director quoted from his directorial venture ‘Virumaandi’ to describe Sathyaraj as a ‘great human being’. 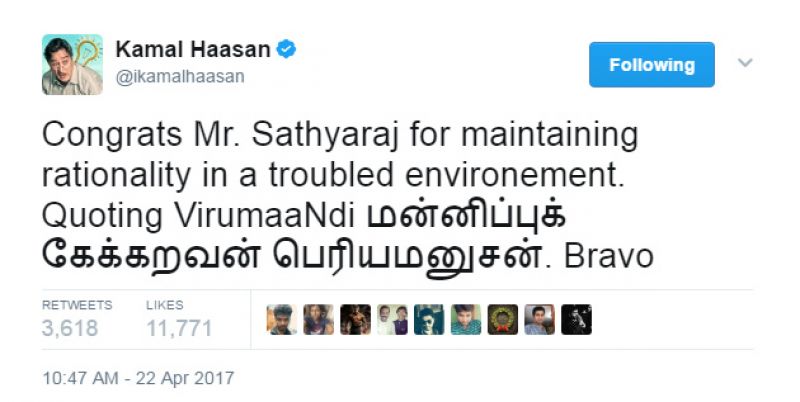 In the movie, the protagonist's wife tells him that a man who seeks forgiveness is a ‘great human being’.

Sathyaraj, who plays the role of Kattappa in SS Rajamouli's ‘Baahubali’ had yesterday expressed regret over his comments made during the Cauvery dispute while appealing for the smooth release of the second part of the film in Karnataka next week.

His statement came following the demand of an apology from the actor by pro-Kannada outfits, who had threatened to stall the release of the film in the state.

They had taken strong objection to some of his remarks made in the light of the Cauvery water sharing dispute between Tamil Nadu and Karnataka.

Sathyaraj had said he had made the remarks nine years ago during a protest organised by the Tamil cinema industry against the 'attack' on Tamils in Karnataka over the Cauvery dispute.

Meanwhile, state BJP leader H Raja lashed out at Sathyaraj and Kamal Haasan, saying they were ‘bothered only about money.’

"Whether it is Kamal or Sathyaraj they are bothered only about money. Their love for Tamil and their Tamil sentiment is only skin deep," he tweeted.

He described Sathyaraj's act as a ‘self-respectless act done for money.’

■Sathyaraj apologises for anti-Kannadiga comments ahead of Baahubali 2 release
■Baahubali: The Conclusion might not release in Karnataka thanks to Kattappa