Casting a wider net in Kollywood

When you look at Hollywood and Bollywood, every film has a casting director, whose job is to select a certain type of actor, singer and dancer for specific roles in the flick.

But this was never the case in Kollywood, where the production house/filmmakers follow the traditional method of spreading word through production managers  to choose artistes for their movies. Of late, many select the right talent after auditioning. However, this is not applicable to stars with brand names, who would be chosen by the makers when the script demands.

Now, with the advent of technology, Tamil directors have resorted to the casting call method using internet. Even big filmmakers like Bharathiraja and Bala have opted for it. Recently, when Soundarya announced her second directorial venture and posted her casting call announcement asking for new talents on various platforms like Twitter, Facebook, WhatsApp and more, the response was amazing. Despite that, she ended up choosing Dhanush as the lead protagonist and named it VIP 2. 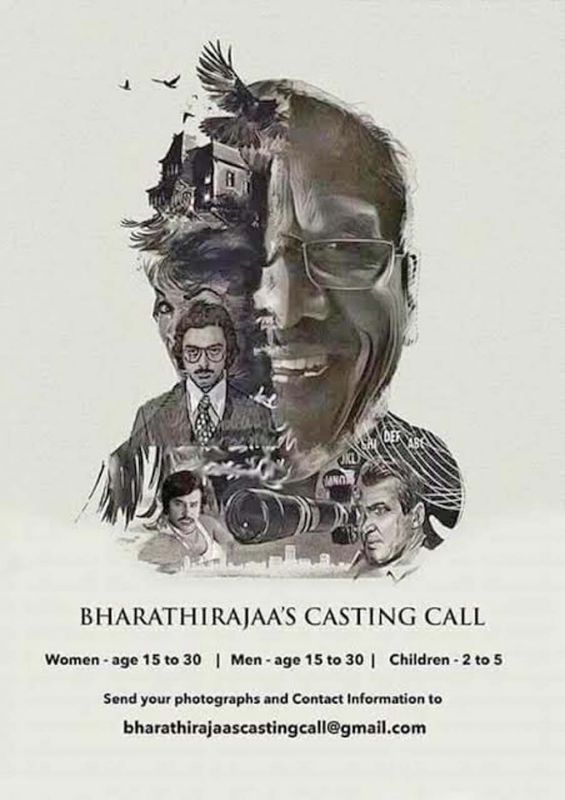 DC speaks to filmmakers to know if this trend will work in the future. Filmmaker Aishwarya Dhanush opines that casting call is a healthy trend. “I think everyone tries new things. The kind of impact social media and online setups create is notable. We should make use of them. There may be several promising young talents who will be discovered. There is big hope for them. I do agree it involves a lot of scrutiny, especially when the CC comes from a big director. We will know how things will pan out only after a period of time.”

Veteran director Bharathiraja is known for realistic and sensitive portrayals of villages in his movies. When the National Award winner announced that he was looking for new faces and called for casting for his forthcoming project — the design of the poster which featured his face and top actors like Rajini and Kamal —  created a buzz. However, entrepreneur and Fully Filmy founder Raunaq Mangottil was quick to react. Apparently, Bharathiraja literally copied one of Raunaq’s creations!

Recalling how Bharathiraja, who has launched hundreds of new faces, picks his actors, director Kannan says, “Casting calls from the director is a great opportunity for the talented and  deserving candidates waiting for their moment. In the past, Bharathiraja sir would go to the respective villages and search for his new cast. That’s how he selected Pandiyan who was selling bangles in Madurai and made him a hero in Man Vaasanai. He knew he could mold Pandiyan as an actor. This speaks of the confidence the legend had.”

He adds, “We usually approach Koothu-u-pattarai or theatre groups for specific talents. Even then, we prepare them well before going for the shoot. Even though Sharddha Srinath has already proven her talents in her Kannada movie, I chose her for my Evan Thanthiran only after I auditioned her for the look test. In today’s scenario, with the mounting production costs, we are not in a position to waste time and money. So, I think casting calls will help producers and should work well.”

Ezhil who is busy with his upcoming flick Saravanan Irukka Bayamaen feels that the new method of sourcing good talents is definitely a welcome one. — “It could help identify fresh talents.” But, a veteran producer on anonymity totally disagrees with others. “This method will never workout in Tamil cinema and will eventually fizzle out!”