For the love of Ilayathalapathy

They were about 800 men and women from different corners of India waiting for 'that moment' with Ilayathalapathy Vijay. The time was around 8.30 in the morning. Their on-screen idol had arrived, throwing a smile at the huge gathering. They would soon come to him, to click a moment to cherish for a lifetime. Saranya T., treasurer of Trivandrum Vijay Idayam Girls (a Vijay fans’ association in Thiruvananthapuram) too got one for the album. Unable to contain her excitement, she made the photo public with a footnote on her personal experiences on her Facebook profile, which soon went viral.

The antics of fans usually don’t go down well with everyone. They are looked down upon, scoffed and miffed at. Saranya's experience was no better. Particularly because she's a girl. “Our association has been there since 2014 and I joined one-and-a-half-years ago. I loved doing something for charity. I joined and became treasurer with the youth wing of Vijay Idayam Girls. We would donate food and blood on his birthday and other special occasions,” she says. 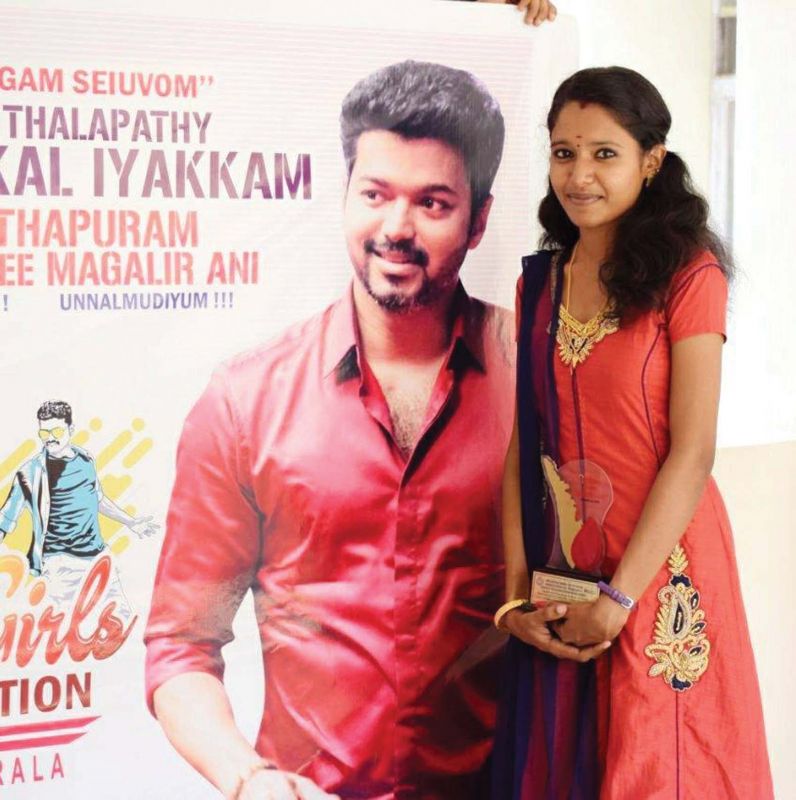 Whatever is said and done, the big dream of getting a photo with Vijay never fades. That was when eight tickets for the eventful ceremony had reached Vijay Idhayam Girls and some of the office bearers were the lucky ones.  “The photo shoot started at 8.30 am on the day and went on till 2.30 pm. He never took rest or sat down.We were amazed by his humility. A leader from our men’s team was sweating heavily and was a little embarrassed to stand near him. Vijay annan asked him why he was moving away. When he disclosed the reason, he brought him closer saying paravala thampi (that's ok, brother). He has no airs,” says Saranya.

Pursuing her post graduation at the outreach centre of Sree Sankaracharya University of Sanskrit in Vanchiyoor, Sarnaya’s fan frenzy came from her brother Sarath. “He watches Vijay movies a lot. I started listening to his songs first. Then I started watching the visuals and before I knew it, I was a fan,” she says. Now, Saranya only wishes that other Vijay fans too would get an opportunity to click a picture with him.

Sonu Sood to be part of Chiranjeevi's 152nd film

'SMZS' has put an Indian film on same-sex relationships on world stage: Ayushmann

Tiger Shroff to star in 'Heropanti 2'

Sam and Prasanna to team up?

Karthik is the hero of Thee Ivan