DECCAN CHRONICLE. | ANUPAMA SUBRAMANIAN
Published Nov 9, 2019, 12:00 am IST
Updated Nov 9, 2019, 12:03 am IST
Ulaganayagan revealed that he and Rajini came to a secret agreement four decades back while standing under a tree at AVM.

As part of his three-day celebrations of his birthday, Kamal Haasan and Rajinikanth jointly unveiled the statue of their mentor — the renowned filmmaker K.Balachander — at Kamal’s newly constructed Raaj Kamal Film International office on Friday.

Addressing Kamal as his ‘Kalaiyulaga Anna’ (Elder brother in cinema), Rajini said, “KB sir is not only a guru for him, he is guru for many including me. Even though Kamal has become a politician, he would never forget or leave his first love — cinema.  Because, he breathes cinema and will be in some department in the film industry. I wish he continues producing films in his banner and gives chances to new talents.” 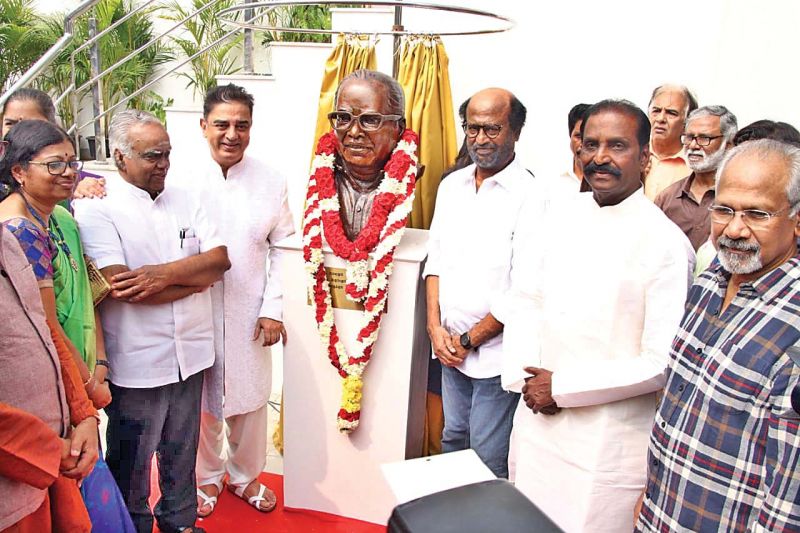 Recalling an incident when Kamal began his first production with Raaja Paarvai as its title, the superstar said, “One day Sivaji Ganesan sir came to me and said, ‘See your friend Kamal is making his first production venture Raaja Paarvai where he plays a blind man. It does not feel as a good sign and why don’t you go and advice him.’ I told him that Kamal must be having something in mind and asked Sivaji sir to go and tell him himself. Later, I watched Aboorva Sahodarargal and was flabbergasted. It was past 2.30 a.m. when I went to Kamal’s place and congratulated him.  At that time there were no technical advancements like today and he was creating records and achievements. Thevar Magan was one of his best.”

Rajini admitted that he is a cinema buff and watched every other film, especially old classics on television. “I quite often watch three films again and again — Hollywood film The Godfather, Sivaji’s Thiruvilayadal and Kamal’s Hey Raam.  I have watched Hey Raam at least 30 times. Making a film like Hey Raam was like a thapas.”

“When I see KB sir’s statue, the first sentence he told me after seeing me was ‘Learn Tamil, I will take you places.’ Kamal is his pet child. KB would adore him inch by inch while acting. Kamal is the right person to instal a statue for KB sir,” Rajini said.

Kamal addressed Rajini as RK before commencing his speech. “Though recognition comes to Rajini late (after 44 years), the International film Festival of India has chosen the right person to confer the Icon Award. I know the kind of hard work he does. But, for me, he became an icon after completing his first year in cinema.”

Ulaganayagan revealed that he and Rajini came to a secret agreement four decades back while standing under a tree at AVM. “We decided that we would travel our own way and explore our strengths. We will be our first fans and even critics. But our respective fans have always had differences of opinion and there have been fan wars. At the same time, we would respect each other and our friendship would continue. So, no one can come in between his friendship with Rajini and they will always share the same love for each other,” Kamal explained.

Kamal also said that K. Balachander will remain forever in our hearts and shared good words about Ananthu, the co-writer of KB, who reportedly taught everything to him.

Very soon, RKFI’s 50th film will be announced in a grand manner. “I need not act in it; someone else can play the lead role and you people have given me the freedom to take that decision”, he concluded.