I am an actor, not a star: Taapsee Pannu

Taapsee Pannu returns to Tamil after a gap with Ashwin's Game Over, where she essays Swapna, a video game designer who is stuck in a wheelchair suffering post traumatic stress. Her condition, which triggers unsettling feelings around the anniversary of a traumatic event is known as ‘anniversary reaction.’

The tall actress, who figured in successful Bollywood movies like Baby, Naam Shabana and Pink, was in Chennai and when DC caught up with her she talked about how challenging it was to sit in a  wheelchair for 12 hours every day for 25 days. She calls herself only an actor and not a star even as she rakes up pay disparities in the industry. She reveals she loves being vocal and how not knowing the language does deter fitting fully into roles and what her dream role is. 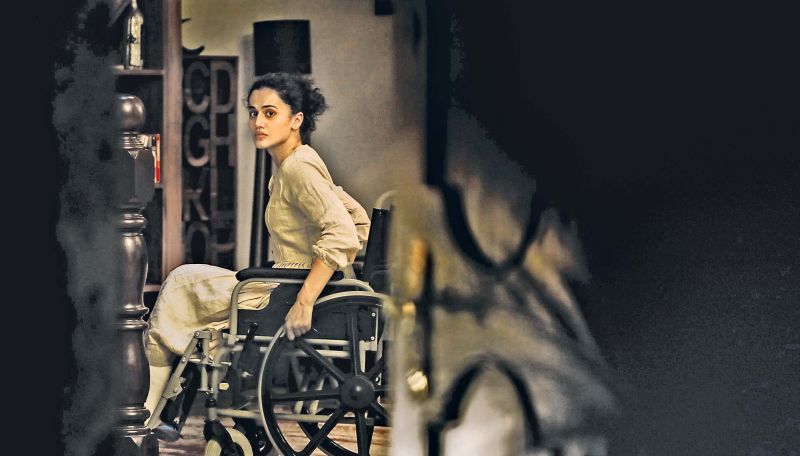 How did Game Over happen: Producer Sasikanth and I have been friends for long but never worked together. This time around it was for work. He wanted me to read Ashwin’s script and I just asked him one thought - hope it is not a horror genre, as I didn’t want to do spooky films anymore. He said, ‘it was a thriller’. I have not read a screenplay or story like this ever in Hindi, Tamil, and Telugu. The script was outstanding and I immediately gave my nod and gave my nod for all languages.

On director Ashwin Saravanan: I have heard a lot about Ashwin. I have seen his horror film Maya in bits and parts, but didn’t see it fully as it scares me. We also had long conversations on the phone after Pink. Half my job is done if I l know and like the director’s work. Because, I am a director’s actor and surrender myself to him/her. I don’t even see monitors. I was more than happy to work in the film and of course, I am back in Tamil after a long hiatus.

Feeling the pressure of being the lone star in GO: I realise now it can quite risky as the film is centred on this character of mine. I did not think of it when I signed the film, such a pressure of handling the film, being the only actor alone helming it did not come to my mind before the promos started. When I saw the poster for the first time with the line ‘Taapsee in Game Over’, which I have not seen before ever, I felt the pinch.  Even in Hindi where I have done protagonists’ roles, they don’t write the name of the actor there.  Here they have done it and I sensed something really big and risky has happened (laughs). Hope it better works!! I am feeling the pressure now.

Wheelchair bound experience: I have not even suffered a fracture in my life. So, I have no idea as how you feel when you get any kind of fracture. It was quite difficult experience for sitting in a wheel chair for 60 per cent of the film.  And imagine wheeling the chair and wheeling the camera as well, since a rig with a camera was attached to it. That was physically as well as mentally challenging, because I play a trauma victim.

Recalling Ashwin’s earlier interview, Taapsee says, ‘He said in an interview that it is so sadistic to put one person who is generally happy in life into such traumatic situation. And make the person a subject of trauma and feel like ‘Oh! how it looks so real and believable’. So you know how it is!

Two big tools taken away from me: There are two important tools an actor has. One is the physical tool expression with your body like run, stop, sit etc. The other tool is your energy and one can have good energy in front of the camera and perform. Bot the tools he had taken away from me. Physically I was on the wheelchair and so I can’t move around and not much of body action and mentally the energy was taken away as I play a trauma victim. With those restrictions it was very difficult to hold the film with 90 percent of screen time was a big challenge.

Why have you not been seen much in Tamil:  They are not giving me without makeup: All my directors hate me wearing makeup, except in one or two films in Hindi. I am okay with it as I can save the time of applying makeup (smiles)

Not a superstar, I am only an actor
There’s only one superstar and the rest are stars.  In my definition stars are ones who guarantee you a certain opening, regardless of the film being good or bad. Like Salman Khan, Shah Rukh Khan and here Ajith sir, Vijay sir etc, who are big stars who command certain opening. The day the audiences walk into my film and say they bought tickets because Taapsee is in it without knowing anything about the movie, that day I become a ‘Star’.
I do films, which have strong female characters. I don’t mind taking up small yet significant characters, which you will be remembered even if you walk out of theatres. The only women-centric film that I did was Naam Shabana.

You are one of the most vocal celebrities on twitter. Has it affected the kind of scripts you choose: They don’t do that! But yes, of late they have started feeling if there’s a fierce character, I should be the first one to get it. That has become apparent. My next film in Hindi, where I am the central protagonist, but she is pretty mean. So, that has not affected!

Tamil remake of Pink not offered: They did not offer me! Even if they had offered, I wouldn’t have taken. As, I don’t want to go through the stress again. It really affected me mentally!

Not knowing the language a big minus:  Actually dubbing in your own voice also kills a film. Most of my Hindi films, which worked, were in sync sound making. The Hindi films in which I dubbed, I killed 60 percent of my performance. I am more of a spontaneous actor. I cannot reproduce exactly how I performed in front of camera again in my voice while dubbing. But, yes, not knowing the language well and if someone else dubs for me, I have felt discontented and incomplete. That’s why I tried dubbing my voice for couple of Telugu films. I learnt Telugu. Whether you like it or not, this is the limitation I have. Fortunately, Game Over is more of action and expressions and less of dialogues.

Vicky Donor remake:  No, I am not doing it!

Favourite game in real life
I like Mario and Pac Man.  I don’t like the killing games and after college I stopped playing video games.

The trend of heroine-oriented films is catching up, but the pay parity is apparent and women in films get less paid. Comment.
Female-centric films are quicker and cheaper to make. Heroines are accepted a lot, if the film has good content. The kind of scripts in south and Hindi that I am getting are experimental and interesting.
Films are driven by how much they collect on the opening day, the star value matters. I don’t have a problem right now! But yes, we are paid less than the male hero. But filmmaking is a business. If my film makes a lot of money, if it opens at par with a big hero’s flick, the same kind of opening numbers, I will also demand the same kind of salary. I can’t ask for equal amount if my films don’t collect that kind of money. I am not even getting 2.4 C (crore), leave alone 24 C that some people get. Let Game Over do very well, I will ask 25 C.

Mission Mangal: It is based on launch of Mangalyaan that happened. The project was headed by a male, which Akshay sir is playing. The core team had 8 women scientists. I am one of them alongside of Vidya Balan, Sonakshi and Nithya Menen etc. We are done with the film.

Biopic: I am part of Saand Ki Aankh, a biopic of  octogenarians sharpshooters Chandro Thomar and Prakashi Thomar.