The Sri Lankan news reader Losliya Mariyanesan, who is one of the popular contestants in Bigg BossTamil reality show hosted by Kamal Haasan, was severely trolled by several netizens as they did not take kindly to her dancing a Trisha chartbuster number. The news reader was seen performing the dance number to the ‘Kattu Kattu’ song from Tirupachi while sporting the character Jaanu’s costume from the film 96.

The simple yellow kurta and blue jeans Trisha wore for her role as Jaanu in the cult classic 96had become a hot fashion item after the film hit the screens, but Losliya seemed ill suited to carry off the scene with the great style that Trisha is known for. 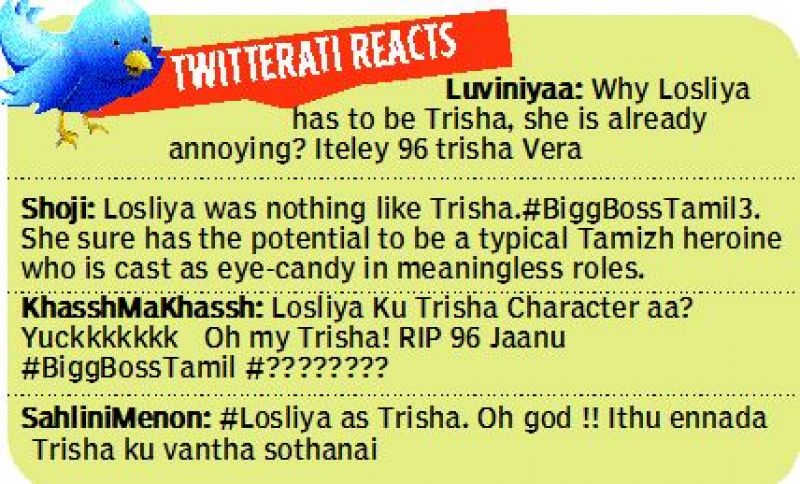 One of the recent tasks given to housemates was to play characters from famous Tamil films while dressing up to perform on the stage any song that was played in the Bigg Boss house. As luck would have it, Losliya was asked to perform the ‘Kattu Kattu’ song from Thirupachi and was given the popular 96costume Trisha wore while playing Jaanu in the film.

While Losliya was trolled by a set of twitter users who were clearly peeved by the manner in which Losliya performed the song, the sporting star Trisha reacted in a very sweet manner. She posted on her Instagram, “Awwwwww Bigg Boss supposedly had JAANU dancing for KATTU KATTU from THIRUPACHI today, Will watch this episode #96thefilm.”