Cannes in a hot lip-lock with Hollywood

The Cannes Film Festival was in hot but brief lip-lock with Hollywood blockbusters.

On Monday afternoon, a pretty girl in a brown shift dress, high boots and red lipstick, one amongst many young boys and girls who are always standing outside the Palais des Festivals holding up requests for tickets, broke into an impromptu jig on the Croisette, Cannes' main road, when someone obliged.

She jumped, swayed and shrieked waving the ticket, reminding me of the Cadbury girl on an Indian cricket field many years ago.

It was a spontaneous display of love for the movies that no one probably captured on camera. But it’s a moment I won’t ever forget.

It was also a moment that marked a brief shift in the festival.

The Cannes Film Festival, which has been celebrating high-brow cinema and the best of masters from across the world for over a week now, was in hot but brief lip-lock with Hollywood blockbusters. 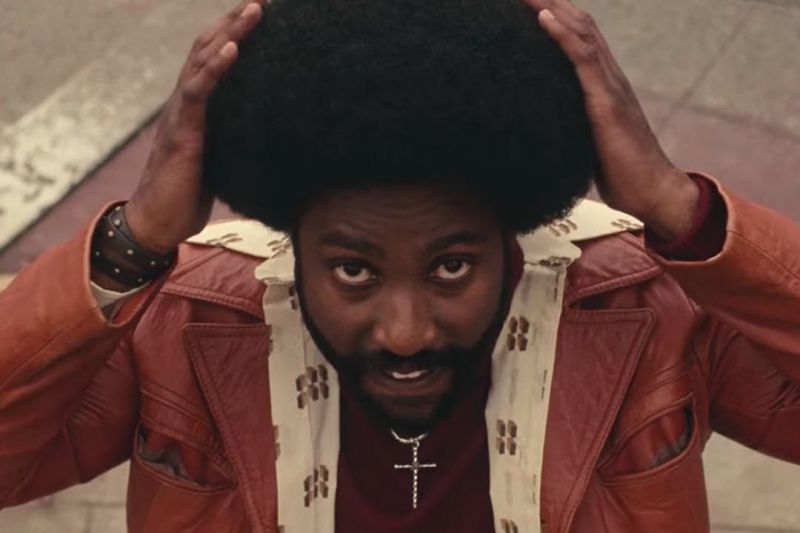 A still from Spike Lee’s 'BlacKkKlasman'.

Having shown a nation’s history and symbol that is at once about white pride and black oppression, Lee’s film gets down to business, switching to a tone that is both comic and sarcastic.

That tone is set by Alec Baldwin with a Trump imitation about making America great again, railing against integration with an "inferior race" to create a "mongrel nation", about the ordained "supremacy of white Protestant values".

An undercover cop, Ron pitches himself to the KKK, including their national director David Duke (played brilliantly by Topher Grace), on the phone as an angry white man keen on doing something more than just burning Crosses. But for actual meetings with KKK, his colleague Phillip Zimmerman (Adam Driver), a Caucasian and a Jew, is sent.

This arrangement is ludicrous, tragic and electrifying.

The film recreates the Seventies and its politics with cheery flamboyance. Ron, student union president Patrice (Laura Harrier), and others wear bell-bottoms held up with big buckles, large pendants dangle around their necks, and most have Afro haircuts, a symbol then of the “black is beautiful” movement.

Lee's film takes in and talks about a lot -- about rejecting bigoted white icons like Tarzan while discussing, in a scene that seemed straight out of a Tarantino film, the bias inherent in movies considered great as well as exploitative but entertaining B-grade trash.

While BlacKkKlasman lays bare racism within the police department, mocks and shames the ridiculousness of white bigotry, it also pokes fun at the strange, constant name changing of black political worthies, and chides the protesting blacks for their own racist view of Americans. Lee’s film, which has rousing "black power" speeches with fists rupturing the air, is not subtle about why it’s retelling a Seventies' story of KKK.

BlacKkKlasman is an overtly political, cocky, angry film by a director who can’t get over the fact that a hate-peddling man he calls “Agent Orange” is the President of the United States. And its heart and hip-shaking spirit is devoted to making the point that America may well have moved back in time as it closes with news footage of the violent neo-Nazi protests in Charlottesville last year.

In its blatantly racist talk of killing blacks, including by a slightly dumb housewife of a KKK member, is a disturbing sting of reality.

The film's climatic sequence, where the gorgeous Harry Belafonte makes an appearance to tell a story while a bomb is being planted and a black man is being arrested, is especially disturbing.

Seven years after he was banned by Cannes for his pro-Nazi statements, Danish director Lars von Trier returned to Cote d'Azur on Tuesday with The House That Jack Built, a serial killer genre film.

Though at one level the film's main character and plot are like that of several previous movies where murderers are shown as intellectual deviants, Von Trier raises his film from being just a genre piece by infusing it with so much political ambiguity and grotesque violence, all done with the sumptuous artistry and savvy of an aesthete,  that it is at once revolting and riveting.

According to Variety, about 100 people walked out of the film’s premiere in disgust. Those who stayed gave it a standing ovation.

In the film, Jack (Matt Dillon) is telling one Verge (played by Bruno Ganz who stays off camera except in the end), about five murders he committed amongst 60-plus over 12 years.

He begins with the murder of a stiff and annoying Uma Thurman who forces Jack to give her a lift in his red van and then pretty much challenges him to kill her while recommending the weapon. 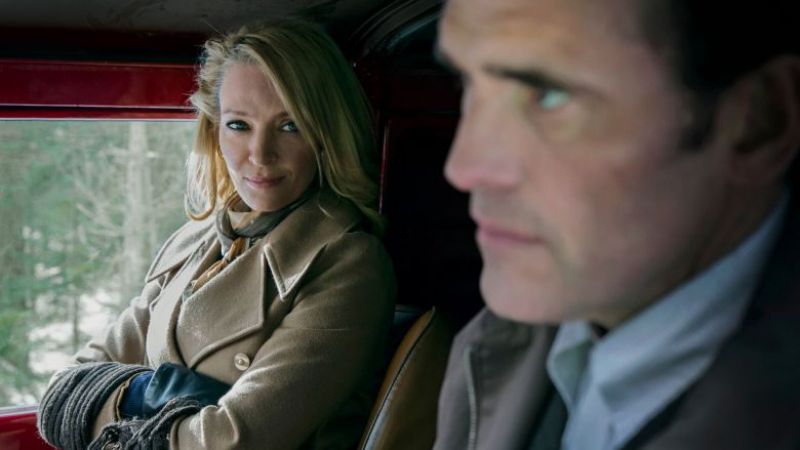 In conversations with Verge (or Virgil, perhaps, the "voice of reason and wisdom" from Dante’s Divine Comedy), that flit between art and self-aggrandisement, Jack talks of his OCD, cleaning fetish, tendency for violence since childhood, ego, lack of empathy, but also the pianist Glenn Gould, William Blake, Gothic cathedral architecture, purification of grapes for wine production, engineering, works of art.

These lectures, at times lengthy and boring, but always rendered with cinematic flourish, are in line with what Von Trier said last year: “The House That Jack Built celebrates the idea that life is evil and soulless, which is sadly proven by the recent rise of the Homo trumpus – the rat king.”

Apart from theories of violence in art, human nature, about why Jack calls himself Mr Sophistication and mails pictures of his artwork to a local newspaper, these asides also lay bare Von Trier’s own politics.

After being banned by Cannes in 2011 for saying “I understand Hitler... I think he did some wrong things, yes, absolutely.... I'm just saying… I understand much about him and I sympathise with him a little bit...,” Von Trier flaunted his status by wearing a T-shirt that said “Persona non grata at Cannes”. And now, in his film, he shows visuals of concentration camps while Jack builds art installations with dead bodies in a cold storage unit. Jack also talks lovingly of the Stuka bomber planes which were fitted with Jericho trumpet sirens that made the signature sound of German air raids during WWII.

Von Trier also articulates his reaction to the #MeToo movement when Jack says, “Why is it always the men's fault?”, and then adds that women as victims are "easier to work with” than men.

The women Jack kills are all single-note characters -- an annoying bitch, a needy mother, a poor widow, and the dumb blonde “Simple” (played brilliantly by Riley Keough). And the violence they are all subjected to is misogynistic, sadistic, gory. But Von Trier arranges the grotesque, especially in a hunting scene with a mother and her two sons and with Simple, as pieces of art that are disturbing in their allure.

There may well be some truth to what his film says -- humans are drawn to violence.

Solo: A Star Wars Story, the latest in the series starring Alden Ehrenreich as Solo, is the dullest of the lot yet and could well be slept through, except for the last 20 minutes when there's some drama that is interesting and exciting.

Mostly, though, Solo is a CGI tamasha that includes several very long and very dull fight scenes with light darts being thrown and pieces of hardware flying about. 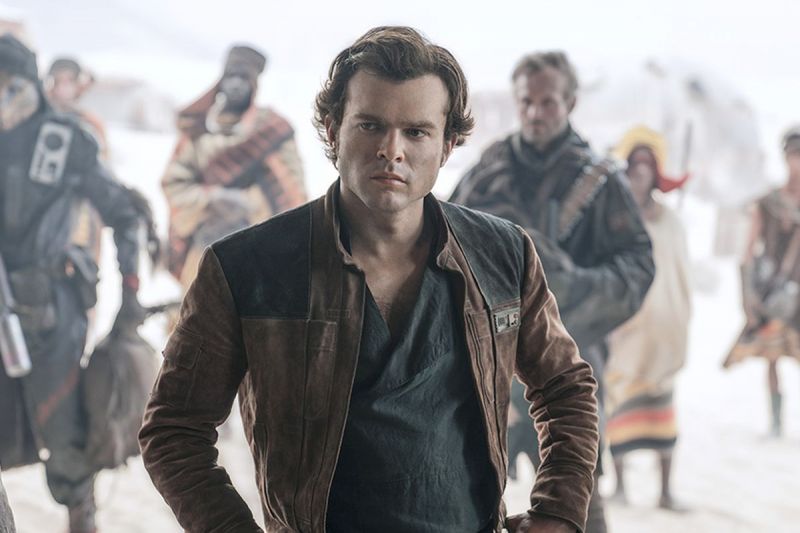 A still from 'Solo: The Star Wars Story'.

Though the film has an impressive cast — Woody Harrelson, Donald Glover and Emilia Clarke among others -- the only one who stands out is Paul Bettany who plays Dryden, the bad guy. Though he seemed like a villain out of a 007 movie and not a man trying to rule the galaxy or the Empire, he brings some tension to the otherwise dull proceedings.

Alden Ehrenreich is cute, but seems more suited for a college romance. Watching him here, I was bored out of my skull.