Waiting for Godard, at Cannes

Cannes: On Friday evening, the 60-meter-long red carpet leading up to the Grand Theatre Lumiere at Cannes Film Festival took on a dignified but reverential demeanour as it readied itself for the premier of Jean-Luc Godard’s feature film, Le Livre D’Image (The Image Book). Hundreds of cameras were aimed and clicked furiously as Godard’s editor Nicole Brenez, producers Fabrice Aragno, Mitra Farahani and Jean Paul Battaggia walked up the red carpet.

Later, as they clapped along with the audience in the 2,309-seater hall, many faces had a toothy smile with a tinge of bewilderment, wondering exactly what they had watched for 85 minutes.

The Image Book, a pastiche of images and sound bound together by Godard’s lefty politics, had had an impact. It felt significant, but it didn’t make much sense apart from being understood as a general wail against the mindless violence that’s all around us and is growing.

That’s why many of the 4,000 journalists who turn up every year to cover the Cannes Film Festival were eagerly looking forward to Godard’s press conference next morning — some for explanation, some for insight, and some, like me, to make head or tail of The Image Book.

The queue started forming 40 minutes in advance of the 11 am press conference and eventually more than a hundred journalists were let in. While waiting for Godard, everyone took note of the one place card on the long table facing the hall full of journalists. It read, Gerard Lefort (a French film critic). Jean-Luc Godard, now 87, was not going to turn up.

“He is not here but will take questions by phone,” Lefort said and then, pointing to a mike placed between the table and seated journalists, added, “Come in pairs to the mike so you won’t be alone, and remember to be polite. Say hello, good morning, ask your question. If it’s in English, someone will translate it for him. And Mr Godard’s answers, in French, will be relayed in English via headphones. I think it’s quite simple.”

These instructions were issued twice while the phone connection was being tested. And then, suddenly, the chatter in the room stopped. Everyone was focused on the dial tone, hoping it’ll be answered. In 2010, Godard, known to be delightfully unpredictable, did not turn up in California to receive the Lifetime Achievement Oscar being awarded to him “for passion, for confrontation, for a new kind of cinema.”

“I don’t want to fly for that long,” he said when asked why he wasn’t going.And in response to what the award meant to him, Godard said, “Nothing.”

The dial tone stopped and a round, old, bespectacled face behind cigar smoke came alive on the phone screen being held high for all to see. 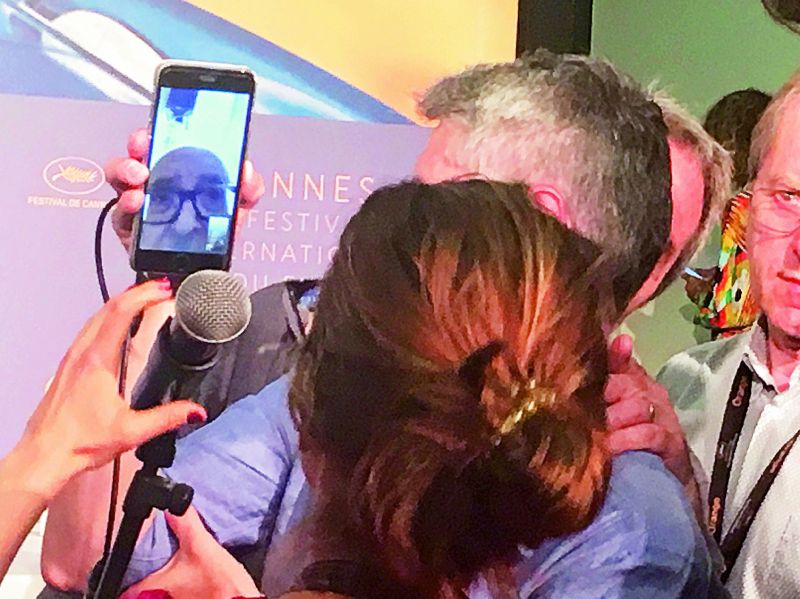 No explanation was offered about why he couldn’t make it in person, but for the next 50 minutes Godard answered all the questions put to him by journalists queued up to speak into the mike and the smartphone simultaneously.

He joked, he spoke of violence in the world, the death of democracy in Europe, about children in Africa, but little about his film. “I’m not interested in showing what’s happening, because that we see all around us, and on Facebook, but in showing what is not happening… Arabs don’t need other people… They have more oil than is necessary. They should be left alone,” he said over the course of the press conference as the mug of this living legend of cinema moved about shifting sizes in the small phone screen.

At times only one ear and one spectacled eye was visible. At others just the head and the top of his glasses. And then, for a bit, the full face would come on.

Each question put to him was prefaced with compliments, admiration for his work, and delivered in a tone that acknowledged that it was in conversation with a moral, political, philosophical, cinematic force.

Then someone asked Godard about his visit to Cannes 50 years ago.

Anger had been brewing since 1967, when restrictions were imposed on dormitory visits at Paris University’s Nanterre campus, preventing male and female students from sleeping with each other. Unrest, demonstrations followed and, in May 1968, the university was closed, throwing students out on the streets to protest.

Other universities joined and there were angry marches, rioting. Now it was about more than just sex on campus. Capitalism, American imperialism, authoritarianism... Soon some 10 million workers joined the students and went on strike, bringing France’s economy to a halt and forcing President Charles de Gaulle to secretly flee the country for a few hours.

At Cannes that May, a group of Nouvelle Vague (New Wave) directors led by Godard and Francois Truffaut interrupted screenings, demanding the festival close in solidarity with the protesters.

"We're talking solidarity with students and workers and you are talking dolly shots and close-ups… You're ass****s!” Godard shouted, memorably, wearing a pair of dark Ray-Bans.

The festival shut down half-way through and no prizes were handed out that year.

And The Image Book, a political essay by the provocateur filmmaker, is in competition for the Palme d'Or, Cannes’ top prize which Godard has never won in his 60-year career.

In The Image Book, Godard, with a DJ-like approach, uses disjointed film clips, images and an unrelated soundtrack — there’s a voiceover, music, dialogue, philosophical quotes. We see the Vietnam war, Isis propaganda videos, Hollywood film clips… A piece of music is amped-up, an image is bleached, there’s crescendo and then there’s quiet.

“The aim was to separate sound from the images, for it to not just be an accompaniment,” he says as his face moves again in the smartphone screen.

We see a sliver of the left ear, some cigar smoke rises.

We hear Godard talking but don’t see the moving mouth.