On Tuesday, a reporter stood up during a press conference and asked Cannes Film Festival’s nine-member jury, “Why do movies still matter?”

In response, jury president Cate Blanchett muttered to co-panelists Lea Seydoux and Kristen Stewart, “Actresses, don’t answer that because you have no idea how to answer that.”

It was said in nervous jest because it’s one of those uncomfortable questions whose fate rests in the answer. Depending on the reply, it can either be a deeply illuminating and inspiring question, or simply a hackneyed bore.

At Cannes, which holds dear its reputation as the “world’s most prestigious film festival”, they pick movies that often provide a lucid, exhilarating answer to that reporter’s question.

Films matter, it tries to say with each screening.
Because films allow people to tell their stories to their own people and to strangers — stories that go beyond news headlines, stories that sometimes governments don’t want people to tell, stories from a far away world that are often uncannily similar to ours, stories that add a touch of humanity to our view of the other. Stories that touch us, shape us, energise us. 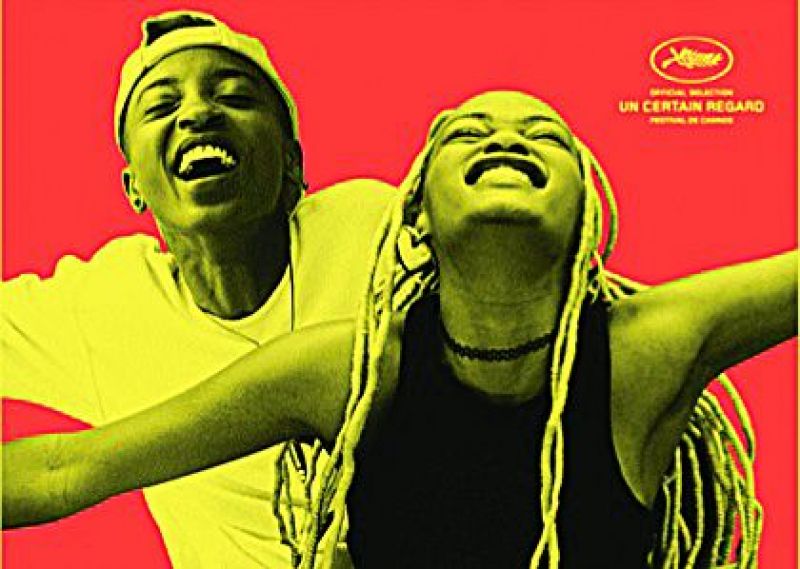 Donbass, the film
Two such films — Donbass and Rafiki — were screened at Cannes on Tuesday in the Un Certain Regard section. Literally, Un Certain Regard means “a certain glance”, but is understood to mean “from another point of view”, and the section is reserved for films by emerging directors or on unexpected, marginal themes.
Nandita Das’ Manto is one of the 18 films competing in this section for the main Prix Un Certain Regard award. It screens on Sunday.

Donbass, a war-torn region in eastern Ukraine, is a portmanteau word, and so is the film of the same title by writer-director Sergei Loznista.

Donbass is a collection of seemingly disjointed episodes of conversations, all of them garrulous and high-strung.

Like pieces of jagged, sharp, gravely stones, these fragments — involving different people in different locations — are strung together as if in a garland that leashes a country and its people together as they struggle to make sense of their world and reality.

There is no fluidity to the plot or the narrative, except, at the end, when the film returns to where it began with stunning effect.

Heartbreaking story
The conversations in Donbass are often one-sided, and the stories Loznista wants us to hear lie in the grim silence and reactions of the listeners. It’s often a shocking, heart-breaking story.

Donbass begins in a trailer where a news story is being manufactured by the people’s government for people’s consumption with the help of make-up artists, actors, bombardment, rehearsed lines and a camera crew.

From there it moves to an official meeting that’s disrupted by a bag of shit, to a hospital, a check-post with too many armed men, to a motaher-daughter. We also meet a real TV news crew trying to interview soldiers, an NGO seeking a favour from an official, an insubordinate soldier being punished, a man trying to reclaim his lost car, an “exterminator” tied to a pole in a residential colony, and witness a wedding before returning to the trailer.

Bit by bit, these episodes reveal a nation brutalised and a government sparing no opportunity to dupe, deceive, rob its people not just of the basic necessities, but of humanity.

Apart from the film’s end, two episodes stand out as most telling, and devastating.

The one involving the “exterminator” seems designed by the government to indict people by helping them transition to mob violence. They are presented with an easy, rather meaningless target to take out their rage on.

The other one is the wedding that is orchestrated to give people something to celebrate even though the bride and the groom, pronounced Mr and Mrs Fried Eggs, seem doomed to a life unpleasant.

The bride’s almost heady hostility towards the man she is marrying even as she screams in celebration is unsettling.

Donbass is a tough film to watch. But it is one of the best anti-war films I have ever seen.

Rafiki (Friend in Kiswahili), written and directed by Wanuhi Kahiu, gently, lyrically tells the story of Kena (Samantha Mugatsia) and Ziki (Sheila Munyiva), two high school girls in Nairobi who fall in love even as their fathers are contesting local elections against each other.

The film has been banned by Kenya’s censor board because it wants to uphold what it claims are “our cultural and moral values through content regulation”.
It is the first film from Kenya to be screened at Cannes.

Rafiki, based on a short story by a Ugandan writer, is light, sweet and packed with stock African characters, including one Mama Atim (Muthoni Gathecha) who runs a little cafe mainly to gossip.

Despite the film’s very Western aesthetics and sound — its English dialogue sound formal and lack local flavour — the story of forbidden love between two girls works because two actresses playing the lead roles are excellent and gorgeous.

Rafiki received a very long standing ovation after its screening. An honour, of course, for a film that won’t be screened in the country it was shot in. But standing ovations, like loud booing, are one of the many charms of Cannes Film Festival. Though they always make news, they often don’t mean much.