New Delhi: Priyanka Chopra's recent post for hubby Nick Jonas was called out for mentioning his wrong age, following which the 'Chains' crooner stepped in to calm netizens through a hilarious meme.

Jonas' meme features an illustration from the popular DC comic, Batman. In the graphic, the comic's titular character represents Priyanka, who is seen slapping the 'Internet' which claims that the Bollywood star doesn't "know his age".

Along with the slap, the Batman version of Priyanka in the meme responds with "It's his bday in 2 weeks," serving a clapback to the trolls who picked on the artist.

Jonas shared the meme on his Instagram story and wrote, "Priyanka Chopra definitely knows my birthday everyone." 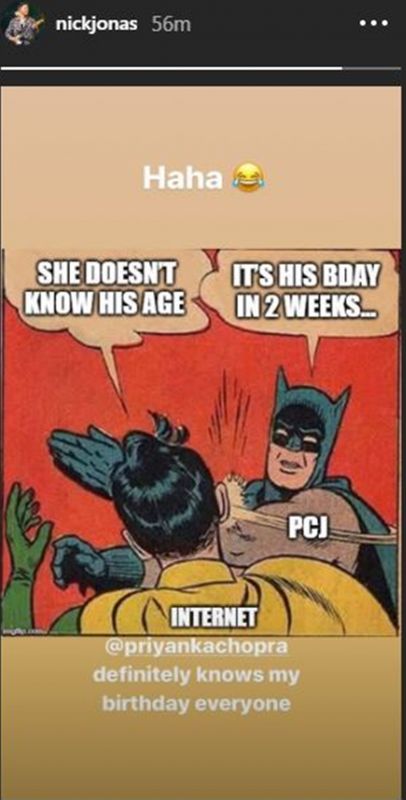 The 'Sucker' singer's comment came after Priyanka, earlier in the day, congratulated him for launching his own tequila label and wrote, "So proud. When you own your own tequila at 27!"

So proud. When you own your own tequila at 27! @villaone ❤

The mention of "27" turned out to be a major goof-up and was soon caught in a controversy claiming that she is unaware of her partner's age.

Nick is due to turn 27 in mid-September this year. On the work front, the Jonas brothers are going places for their 'Happiness Begins' tour which kicked off on August 7 in Miami, Florida. It is slated to continue till October 20.

'He is unique, complex': Rami Malek on his Bond villain