Mumbai: Soha Ali Khan will come out with her debut book this year which will be a collection of humorous, and sometimes bizarre, stories on her life as a royal princess and a ‘moderately famous’ celebrity, as she likes to call herself. 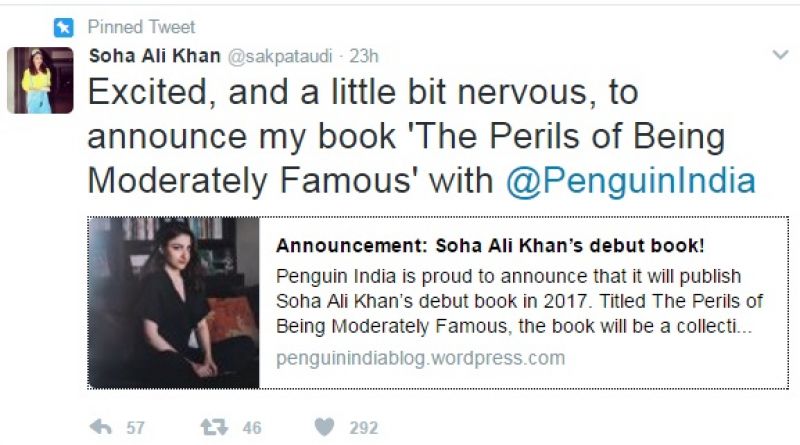 “If I had a dollar for every person who told me to write a book, I would have umm...six dollars. I do love to read and I do that quite well (510 words a minute), so it can’t be much harder to write, right? I also have some time on my hands, as most actors often do (stop sniggering),” the actor said.

“I can use this time creatively to pen down memories, some insights from what surely must be a life less ordinary. I am a princess (her official title is Nawabzadi Soha Ali Khan of Pataudi and Bhopal) after all,” she said.

But she has a 'word of caution'.

“If you are hoping I will reveal the secret behind Kareena’s glowing complexion or how Bhai (Saif) trains for an action film then, I am afraid you are barking up the wrong book. Although, in its pages there may be a passing reference to some of the idiosyncrasies of the more famous members of my family, the bulk of it, I’m afraid, is about...well, me. Just me,” she said.

“She has amassed a huge fan following not only for her movies but also for her witty repartee on Twitter, and her charm and wit continue to shine in this brilliant collection of personal essays where she recounts with self-deprecating humour some of the most poignant moments of her life - from growing up as a modern-day princess to life as a celebrity in the times of social media culture,” Gurveen said.

Soha, who studied modern history at Balliol College, Oxford and earned a Masters’ degree in International Relations from the London School of Economics and Political Science, starred in the recent 31st October, a true story focussing on the aftermath of Indira Gandhi’s assassination.

Trinadh set for his next film

I am choosy about scripts says actor Bellamkonda Sreenivas