Sushant is still basking in the success of his unanimously acclaimed portrayal of MS Dhoni, in the latter's critically and commercially succesful biopic.

Mumbai: Sushant Singh Rajput, just four films old, is already amongst the most sought after young actors in the country.

The actor, who, starred as the Indian ODI skipper, MS Dhoni, in the latter's phenomenally successful biopic, helmed by Neeraj Pandey, had invested a good two years of his life to the film.

And the unanimously acclaimed performance that he pitched in ensured that his career was an all-time high pedestal and filmmakers have been thronging in to sign him. The actor, who has 'Raabta,' 'Takadum' and 'Chandamama Door Ke' in his kitty, currently, had also been associated with Shekhar Kapur's futuristic magnum opus 'Paani' for the longest time.

The film, which had been announced at the Cannes Film Festival, way back in 2010, was initially to star Hrithik Roshan, who reportedly left the project, in favour of Ashutosh Gowarikar's 'Mohenjo Daro'.

The project which later fell into Sushant's hands has been in the making for the longest time, with absolutely no progress, with news of the film having been shelved beginning to do the rounds. Shekhar himself had moved on to his TV series based on Cleopatra.

However, if Sushant's latest Instagram update is any reprieve, the film could well be back on-track.

Sushant shared a picture with the veteran filmmaker, thanking him for understanding him. 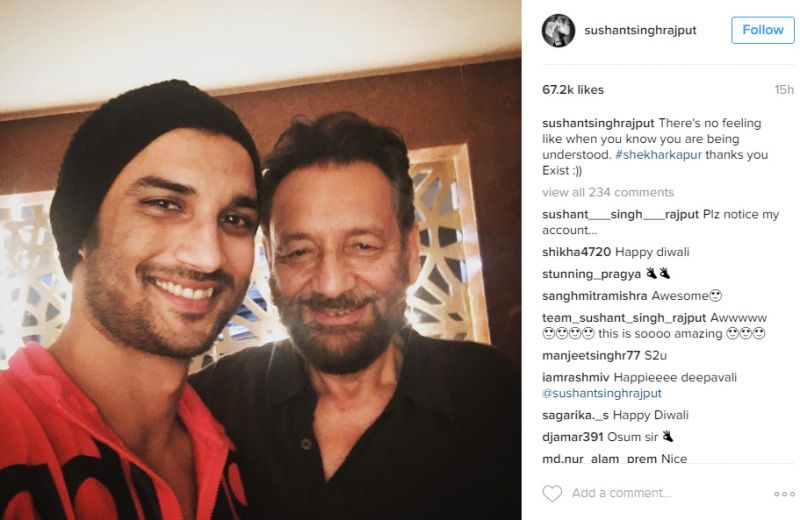 Going by the happy faces in the picture, the film could well be back in the reckoning and the highly anticipated AR Rahman musical, set to be produced by Aditya Chopra.