‘In solidarity’ with their army, Pak cinemas boycott Indian movies

'Pink' which was being screened in the country, is not being exhibited any more.

Mumbai: Amid the heightening tension between India and Pakistan over the terror attacks in Uri and the Indian armed forces' surgical strikes in the neighbouring country in retaliation, the film industries of both the countries have also got themselves involved in the matter.

After the Indian Motion Picture Producers Association (IMPPA) said on Thursday that they had decided to not work with Pakistani artistes till normalcy returns, theatres in Pakistan have also decided to stop screening of Indian films in the country to express ‘solidarity with their armed forces and film actors', reports Dawn.

Nadeem Mandviwalla, a well-known film exhibitor, distributor and owner of the Atrium cinemas in Lahore and Karachi, said that the boycott would be unanimous until the situation improved. Saleem Khan of the famous Capri cinema in Karachi said they had stopped showing Indian films since last night.

Pakistan's film industry fears it may suffer a 70 percent business loss if Indo-Pak ties worsen and Bollywood films are banned in the country. The fear among the industry people has been growing as they feel if the situation does not improve there would be calls to ban Indian films eventually. 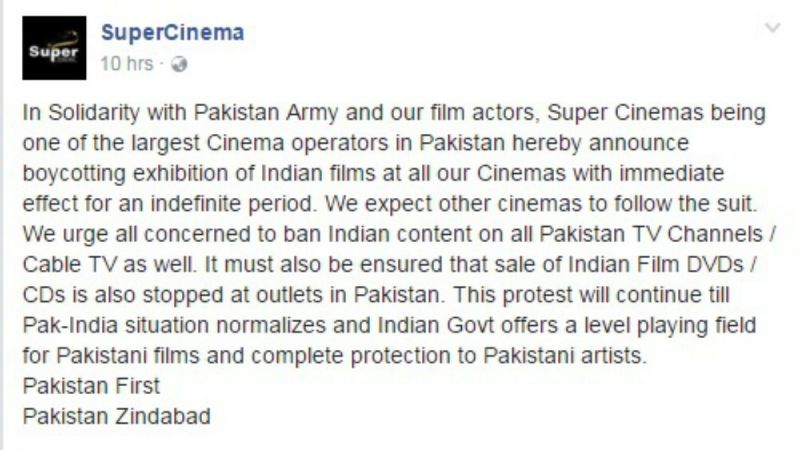 Amitabh Bachchan’s critically acclaimed ‘Pink’, which was being screened in these theatres, is not being screened anymore. Pakistani films 'Janaan', 'Actor In Law', 'Maalik' and 'Zindagi Kitni Haseen Hay' and Hollywood releases 'Sully', 'Storks' and 'The Magnificent Seven', 'Howl' and 'Deepwater Horizon' are some of the films that are being shown currently in these theatres.

■Pakistan artistes come to India to rake in moolah: BJP
■Think and speak calmly, says Juhi Chawla post MNS ultimatum to Pak artistes
■All Pak artistes have left Mumbai, will hunt down whoever is still left: MNS
■Boycotting Pakistani artistes is not a solution to terrorism: Karan Johar
■India film body signals end of the road for Pak actors in Bollywood