Dhoni fans all excited to catch his film

He’s fast, he’s furious and he has an invincible charm about him that you cannot ignore. No wonder then he’s called Captain Cool by many. City fans are all gung-ho to catch Sushant Singh Rajput don the Indian Blue for MS Dhoni’s biopic MS Dhoni: The Untold Story by Neeraj Pandey that hits the silver screen today. We find out from city fans what they feel about the Indian skipper, his journey, his rise and what they have planned for the biopic.

Looking forward to watch his idol Dhoni play the Indian ODI skipper is model Harsh Chauhan who works as an area manager with a consumer brand. He is going for first day first show with his friends Akhil Jain, Faizan Ahmad and Aditya Varma. Harsh says, “Dhoni is by far the greatest captain, wicket-keeper and finisher the world has ever known. He’s given everything on the field throughout. We cannot contain our excitement as we get to watch the movie tomorrow.

We’ve waited for this day, all year! We have already taken leave this Friday for the first day first show and will all be wearing Dhoni’s jerseys. Our planning started a month ago when friends got together over a coffee and formed a WhatsApp group. We booked our tickets in advance and have over 35 people in this group who will be watching the movie together. It’s a big day for us as fans and we will cherish it forever.” 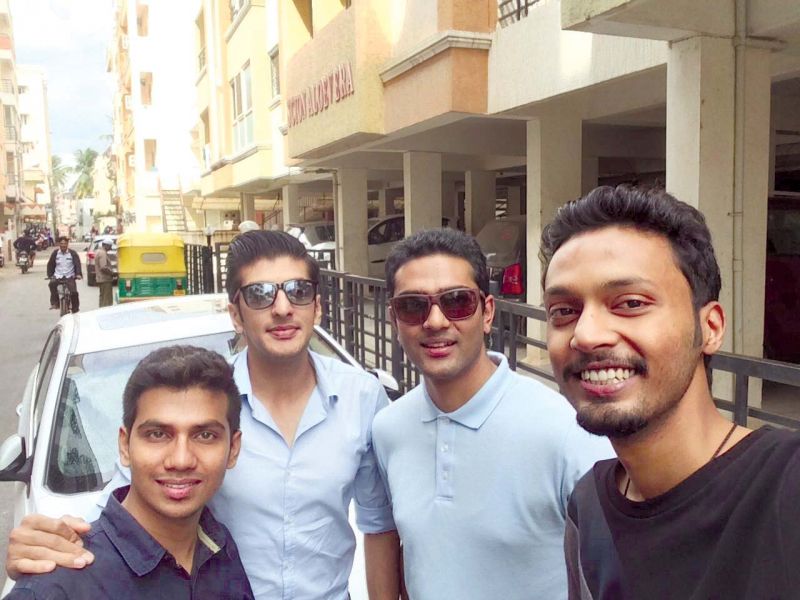 Model Harsh Chauhan with his die-hard Dhoni fan friends all set to watch the first day first show today A city-based entrepreneur who was also a panelist for a cricket show on a news channel says, “The movie will surely be one of many climaxes as Dhoni has helped India win many matches from losing situations. He has an unflappable temperament and doesn’t take himself too seriously. I would love to see how Sushant portrays Dhoni as it looks like Sushant has done a reasonably good job of getting the trade mark shot of MSD — the helicopter shot right. The movie talks about his evolution and the fact that if you dream big you can make it through,” chimes Shekhar Vijayan.

Agreeing to Dhoni being one of the most terrific leaders the Indian cricket team has ever seen is another fan, DJ Chico who flew down to catch the movie with his friends in Bengaluru says, “I’m a cricket buff and have been following Dhoni’s matches. What I really like about him is that he’s calm and nothing affects him. He’s got the right attitude that every sportsman should have, irrespective of win or loss.”

The film will see Kiara Advani playing Sakshi Dhoni and Bhumika Chawla (who has acted in a couple of Kannada movies like Godfather and Luv U Alia) playing Dhoni’s sister. Gurpreet Singh, head honcho with a leading Bengaluru-based beer firm adds, “Most people ‘react’ to situations, but Dhoni is the kind of person who ‘responds’ to such situations. It is therefore not surprising that he gets the kind of results he does on field. He’s a natural leader who I credit with the accomplishment of completing the transformation of the Indian cricket team into a winning unit. He’s my Captain Cool for all occasions!”

Model and sports anchor who presented the Pro Kabbadi league recently, Pooja Bhamrah is a die-hard Dhoni fan. Pooja says, “One can’t help but get mesmerised by MSD. He’s a complete package and has improved with every season. What makes him desirable is the grit and determination with which he pursued his dreams and always has his head on his shoulders. I’m sure Sushant will do a fabulous job in Dhoni’s shoes in the biopic.”