Fan’s letter to Taapsee Pannu moves her to tears

Mumbai: There are very few films in the history of cinema that had not only tasted commercial success, but also earned critical acclaim. And one such film is Amitabh Bachchan-Taapsee Pannu starrer ‘Pink’. The film, which highlights the plight of women in a modern set up, had opened to thundering response at the box office and continues to win hearts.

Ever since the film released, the entire star cast has been showered with love and appreciation from all quarters but it was one fan in particular that moved leading lady Taapsee Pannu to tears.

In a letter to the star, the fan congratulated her for the success of the film and thanked her for the movement they have started.

Hope you are well. Before you wonder who I am, let me tell you that you don’t know me at all. But I felt the need and urge to write this letter to you after I watched Pink. I know the movie has done well and many congratulations to you on that. The reason I write to you is because this is much more than a film to me. It is a lesson in freedom and liberation.

Perhaps, not many would get what I am saying. I come from a small town called Shimla. I have grown up in a pretty middle class set up, which has always taught me to uphold my values and traditions. However, when I moved out of Shimla and started continuing my studies in Delhi, I realised that values and traditions are not everything, and no matter how much you uphold them, there will come a time when you have to make a choice between what is right and what is convenient. We are taught very early in life to keep our mouth shut when we want to share something that goes against family traditions. As girls, we are silenced more often but what we forget is the silence in our childhood transforms into silence in our adulthood as well. We get used to being a certain type, talking in a certain tone, and behaving in a certain manner no matter what the circumstances.

The instances portrayed in the film, we have all gone through in our lives. But how many of us have had the courage to stand up and say ‘I am right, they are wrong’ not many Taapsee. For you it may have been just a role that you essayed but trust me, you have transformed many lives, many mindsets. You have made girls strong, you have given them a reason to think about themselves, to love themselves enough to fight the odds in society. You have done what many actors haven’t been able to do. As a girl and as an actor, you should be proud that today you have managed to make a difference. Maybe every girl will not have the courage or willpower yet. Maybe the complete transformation of the society will take some time. Maybe it will still take some time for people to understand that ‘no means no’. But you have made a start, and that’s what matters.

Here is the actual letter that the fan posted on Twitter: 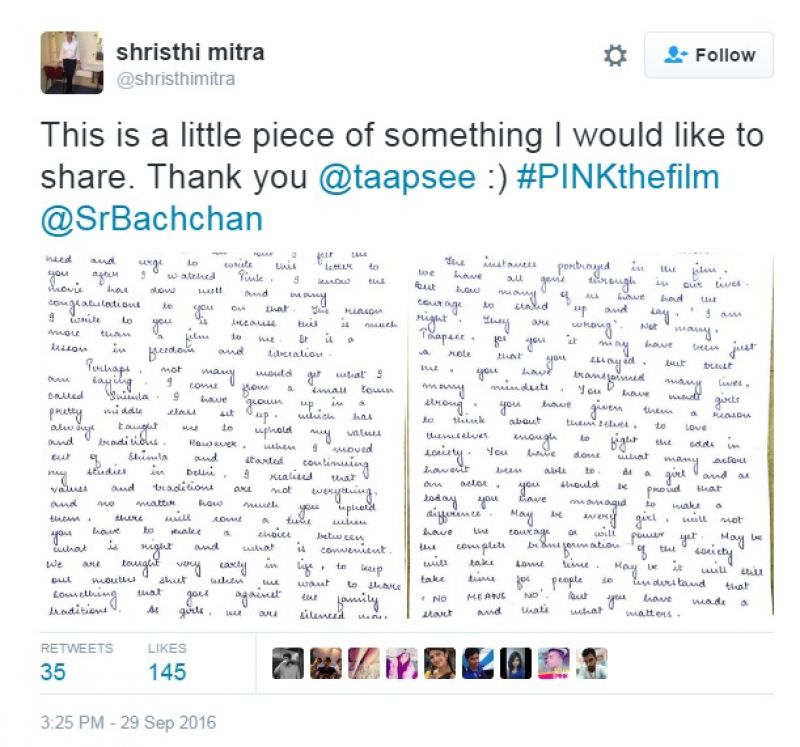 Taapsee took to Twitter to thank her fan for the letter that moved her to tears. Here is what the actress said: 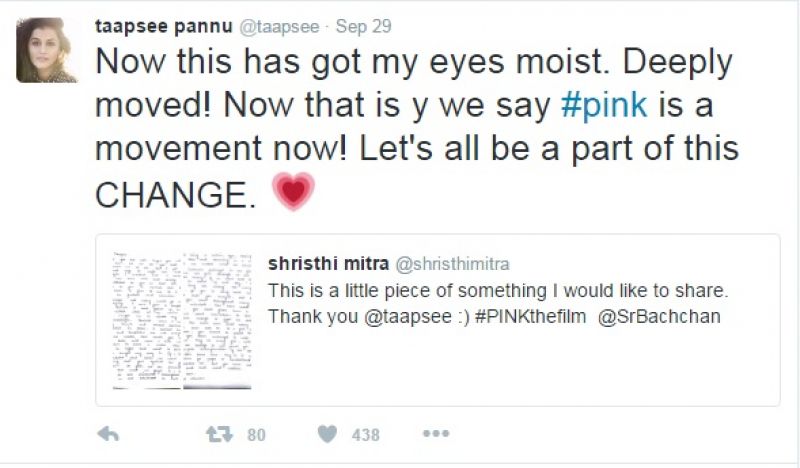 ■Pink success proves again content is the king
■Amitabh Bachchan’s Pink to be used to promote Zero FIR law
■‘Pink is not a film, it is like a movement’ – Amitabh Bachchan
■Pink movie review: Packing ‘No’ with more power

Amitabh Bachchan and team celebrate the success of 'Pink'