India had carried out surgical strikes on seven terror launchpads across the LoC.

India had carried out surgical strikes on seven terror launchpads across the LoC, with the army saying its special forces inflicted ‘significant casualties’ on terrorists preparing to infiltrate from Pakistan-occupied Kashmir (PoK).

However, Adnan refrained from mentioning Pakistan in his tweet, presumably fearing tremendous backlash.

Despite of that, there was heavy backlash from Pakistani users on his feed. 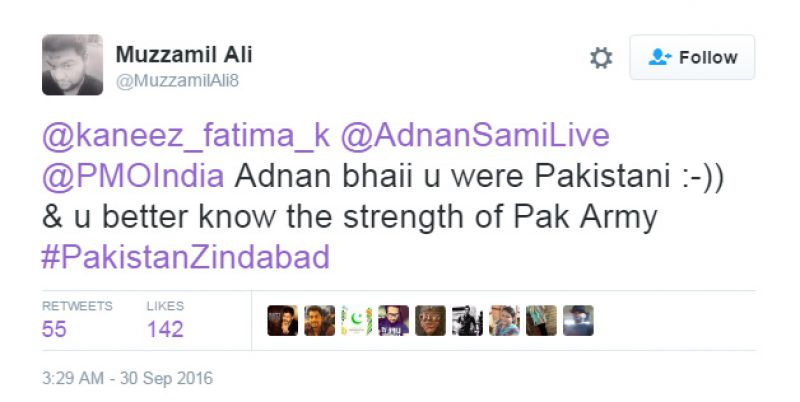 The actor later lashed out at the slanderers saying that they fail to distinguish between 'terrorists and 'Pakistanis'.

The Indian government has granted him the right to stay in India, indefinitely, on humanitarian grounds after the Pakistan government refused to renew his passport in May, 2015.

“What an amazing gift I've received this birthday(42nd). The gift to breathe freely in my home. I can’t begin to express my relief and gratitude.  I’ve renounced my Pakistani citizenship and now India is my home, as it has been for the last 14 years,” the acclaimed musician had said.