New Delhi: Shahid Kapoor and Kiara Advani have wrapped up shooting for their upcoming film ‘Kabir Singh’ and it is all set to hit the theatres in June.

Kiara posted a couple of pictures on an Instagram story where she can be seen cutting the cake, with the team of her upcoming film, and celebrating the shoot wrap. 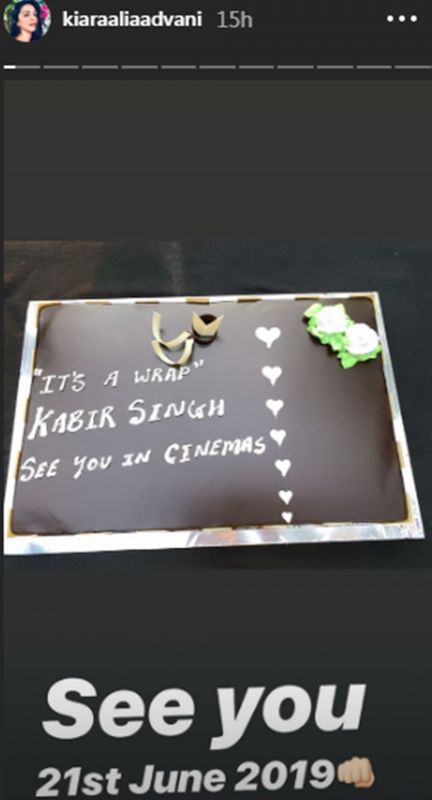 While in the picture the team can be seen having fun, Shahid Kapoor is nowhere to be seen in the series of post. However, Kiara, in one of her posts wrote, “We miss you Shahid Kapoor.”

The movie is a Hindi remake of Telugu hit film ‘Arjun Reddy’. While 'Padmaavat' star will play the role of Kabir Singh, Advani who was recently seen in Netflix's 'Lust Stories' will essay the role of Preeti.

The story is based on Arjun Reddy, a successful young medical surgeon, who sets out on the path of self-destruction when his lady-love is forced to marry another man.

The original blockbuster starred Vijay Deverakonda and Shalini Pandey in the lead roles. The film is directed by Sandeep Reddy Vanga and produced by Bhushan Kumar, Murad Khetani, Krishan Kumar and Ashwin Varde.

The film is scheduled to hit the big screens on June 21, this year.