Khanna, who died in 2012 after battling cancer, was referred to as the first and the original "superstar" of Indian cinema.

Taking to Twitter, the 41-year-old star posted a black and white image of herself along with her father.

"I see you, in my reflection off the back of a gleaming spoon, in a gesture my sister makes, in the arch of my son's eyebrows- I still see you," Twinkle captioned the picture. 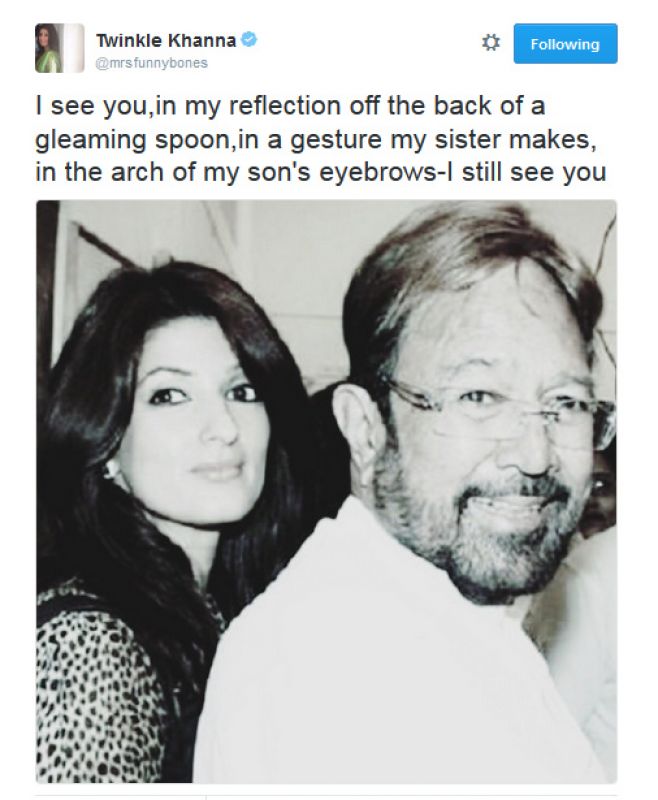 Khanna, who died in 2012 after battling cancer, was referred to as the first and the original "superstar" of Indian cinema.

He starred in 15 consecutive solo hit films from 1969 to 1971, still an unbreakable record.

The actor was known for his work in films like 'The Train', 'Kati Patang', 'Anand', 'Haathi Mere Saathi', 'Namak Haraam' and 'Amar Prem'.

■'You're a flop actress': Salman’s fans troll Twinkle Khanna for taking a dig at him
■Hawker tries to sell Twinkle Khanna her books; she reacts in her signature style!
■Twinkle Khanna to conceptualise, turn producer with Akshay-Balki film?
■How to feel patriotic when I'm about to see Ranveer in his tight underwear: Twinkle