Mumbai: After a lot of drama and legal hassle between self proclaimed movie critic Kamaal R Khan and Ajay Devgn, seems like the former still has a lot to say about the actor.

After leaking few potions of 'Shivaay' online, KRK went on a Twitter rant and slammed Ajay Devgn by calling him a 'dangerous man with black heart' who is using 'religion to become a big star'.

"4 Me, AjayDevgan is most dangerous man with black heart who is using his religion to become a big star while Bollywd doesn't believe in this," KRK wrote. 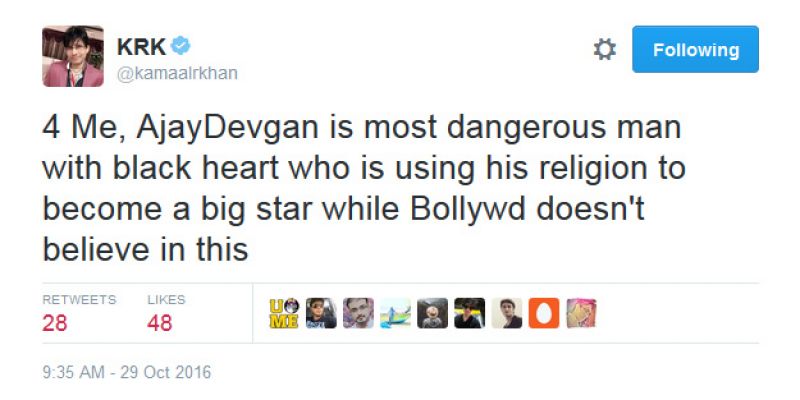 He didn't just stop there and also compared the actor with the Khans of Bollywood.

KRK said, "Ajay Devgan should remember that he is just an actor n Khans are stars n I think he should be happy tat he is actor with such a personality."

"The biggest problem of Ajay Devgan is this tat he wants to become big star like Khans, while he shud be happy to compete with John Abraham," he added. 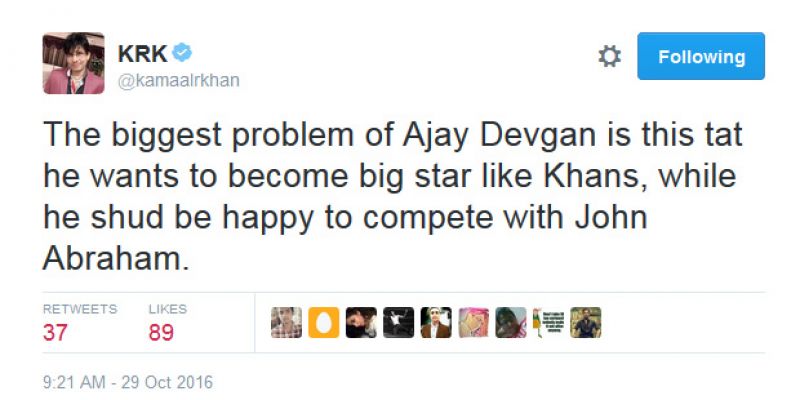 Apparently, Kamaal R. Khan sparked controversy on Thursday when he apparently recorded portions of Shivaay at a Dubai cinema hall and posted it on Twitter. Khan had earlier this year, gotten into a war of words with Ajay Devgn.

The repercussions of his latest however, have been quick to follow. Shivaay co-producers, Reliance Entertainment is going to initiate a strong legal action against Khan.

Confirming the same, Shibashish Sarkar the COO of Reliance told us, “Yes, we are initiating legal action for copying the film from a cinema hall.”

However, KRK is still unfazed by the entire controversy.