Mumbai: From the adage ‘actresses can’t be friends’ dominating Bollywood, there has surely been a marginal wave of change of late.

So though the top-notch actresses are not seen bonding big time as such, they have given enough proofs that they are not that insecure of their contemporaries anymore.

Sonam Kapoor and Jacqueline Fernandez being BFFs, Alia Bhatt and Katrina Kaif appearing together on a TV show and bonding in the gym, Anushka Sharma praising Deepika Padukone’s Cannes look, are some of the examples of it.

And it’s Katrina again this time, bonding with the soon-to-be-debutante, Janhvi Kapoor.

So it seems the two actresses share the same gym and Katrina posted this picture of Janhvi as a receptionist, on her Intagram stories.

She wrote, “Gym has a pretty new receptionist in @janhvikapoor." 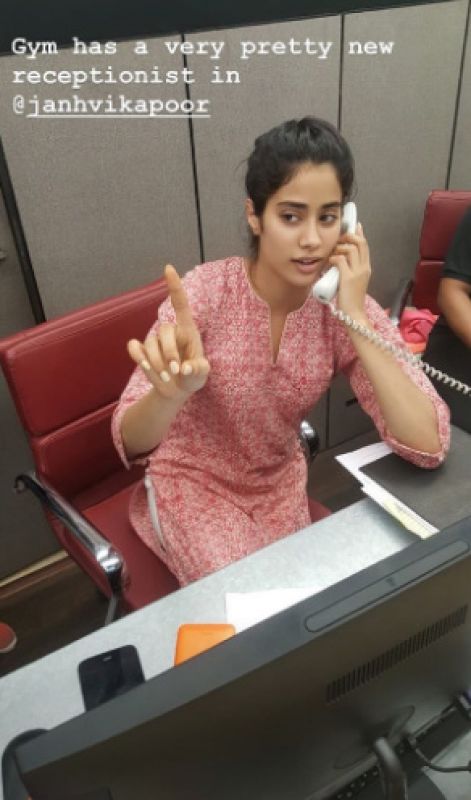 We are not sure if Janhvi posed as a receptionist just for fun for Katrina or she actually sat down on the chair to make an urgent call, though the latter reason seems unlikely in the age of mobile phones.

We wonder what’s she doing in the gym, firstly dressed in a kurti and secondly not showing any trace of ‘sweating’ out.

Maybe it’s just in the genes, after all she is Sridevi’s daughter.

Such a post from a senior calling her pretty would no doubt build Janhvi’s confidence before she makes her debut with ‘Dhadak’ later this year.