Mumbai: While Bollywood is still in shock after prolific director Sanjay Leela Bhansali was assaulted by members of the Rajput Karni Sena for allegedly twisting history in his upcoming period drama, 'Padmavati,' the industry hasn't shied away from voicing their disgust and umbrage.

Karan Johar, in particular, has been extremely vocal about the issue, having himself been subjected to political bullying on multiple occasions, the most recent being his 2016 directorial 'Ae Dil Hai Mushil' being bullied by the Maharashtra Navnirman Sena, for having cast Pakistani actor Fawad Khan, in the wake of the Uri terror attack.

Karan went on to fulminate on his Twitter feed, asking unity of the industry.

His 'Bombay Velvet director, Anurag Kashyap, had also vociferously lambasted the attack on the big budget film, which stars Deepika Padukone, Shahid Kapoor and Ranveer Singh in the lead roles.

In response to one of his tweets a digressive Twitter troll went on to ask the director to 'stop sleeping with Karan Johar,' insinuating a sexual relationship between the two.

Karan, evidently in a state of fury post the violent incident, didn't take it lying down, blasting at the troll for his unsavoury remark. 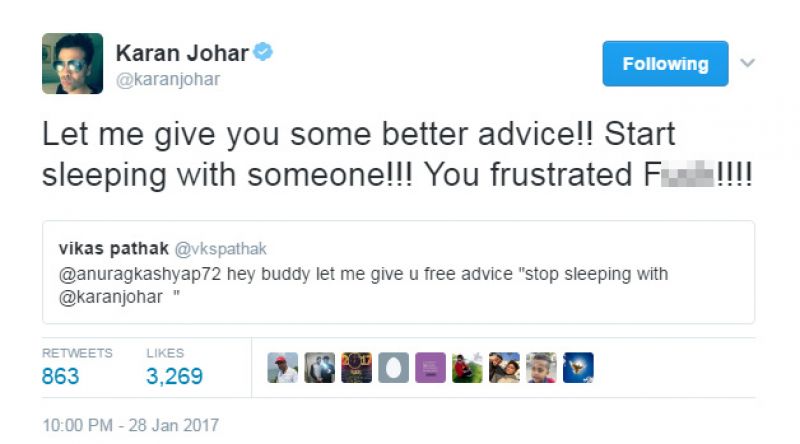 "We had warned the filmmaker against presenting wrong facts. When we came to know about the shooting, we gathered there and protested," district president of Karni Sena, Narayan Singh, had said.

The major grouse of the protestors has been regarding a purported glorification of the infamous Saracenic invader, Allaudin Khilji, being played by Ranveer Singh.