A still from the trailer

Yash Raj Films has released the trailer of this year’s most-anticipated film, Thugs Of Hindostan, on Yash Chopra’s 86th birth anniversary. On the occasion, actor Amitabh Bachchan, who plays one of the film’s leads, reminisces on his association with the late filmmaker and says that he blindly accepts whatever he is offered by the banner.

“I was very close to him (Yash Chopra). Today, as a film is being launched on such a massive platform under the Yash Raj banner, I think of the days when Yash Chopra just had a small office at Raj Kamal Studio,” Mr Bachchan says, adding “Adi (Aditya Chopra) has fulfilled his father’s dream, and working with him is like spending time with family. He stood by me when I was going through a low phase, so whenever I receive an offer from him, I blindly accept it.”

Thugs Of Hindostan is an action-adventure film written and directed by Vijay Krishna Acharya. It is believed to be an adaptation of the 1839 novel Confessions of a Thug, and it promises a visual spectacle complete with epic sets and jaw-dropping action sequences.

We also hear that Mr Bachchan has performed some intense action scenes in the film. He says, “I’m not of the age to be doing these things, but the director asked me to, so I did it.”

“It would have been easier had I been wearing regular clothes, but I was made to wear leather garments and an armour — all of which weighed about 30 to 40 kilos. The most dangerous part was that all the action sequences were shot in the rain, which made the costume even heavier,” he adds. 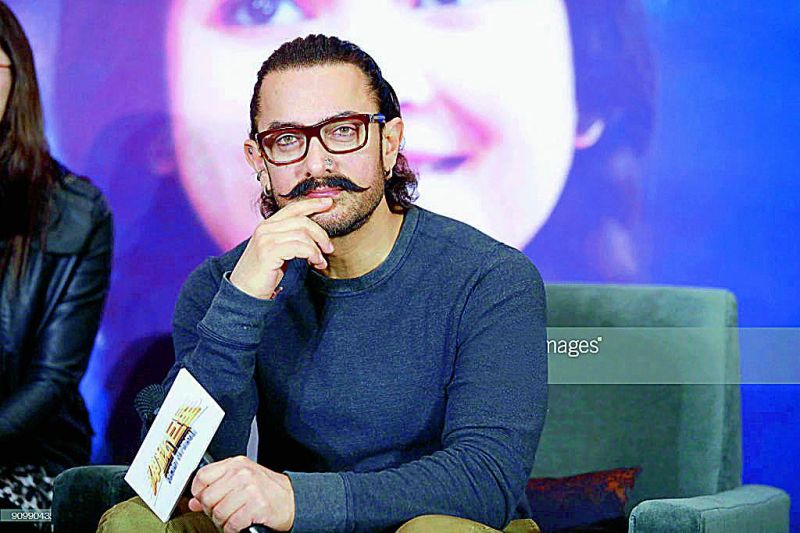 The actor also reveals that he’s glad to have finally had an opportunity to work with Aamir Khan. “We’ve been offered many films together, but he turned them all down. It’s my good fortune that I have finally had an opportunity to work with him. Aamir is a writer, director, distributor, and marketing genius apart from being a brilliant actor, so it’s difficult to be on par with him. I have been telling him to direct something and give me a small role in it; I’ve even shared a few ideas with him. All he’s said is that he will think about it.”

Aamir responds by simply saying, “Indra Kumar was supposed to make a film with both of us, but it didn’t get made. Since then, I’ve been waiting for an opportunity to work with Mr Bachchan. I could never say no to a project with him.”

Meanwhile
When asked for their opinions on the allegations of sexual harassment levelled by Tanushree Dutta against veteran actor Nana Patekar, here’s what the Thugs of Hindostan actors had to say —
Amitabh Bachchan – “Neither is my name Tanushree nor is it Nana Patekar.”
Aamir Khan — “Without knowing the veracity or the details, I don't think I can comment on the matter, it would not be right. Whenever something like this happens, it’s really sad. But whether it has happened, is for people to investigate.”