Tiger’s mom Ayesha doesn’t have problems with his gf Disha, has special name for her

Mumbai: After the recent weddings of Virat Kohli and Anushka Sharma as well as Sonam Kapoor with Anand Ahuja and the impending one between Ranveer Singh and Deepika Padukone, one thing is clear. Whether Bollywood couples accept their relationship or not, there’s no doubt in the minds of fans and media about the pairs being a couple.

The case with Tiger Shroff and Disha Patani is no different. The actors has time and again denied they are a couple, and insisted they are just friends, but who’s believing them?

Some believed that their link-up and regular spotting was a promotional ploy for ‘Baaghi 2’ and when the film worked wonders at the box office, that’d be the end of their affair.

But that didn’t happen, and their recent ‘movie date’ was just an example.

And it seems Tiger’s mother, former actress and model, Ayesha Shroff has also given her approval to the relationship.

Ayesha has made appearances with Disha before, most recently for lunch last month, but earlier there were reports that she was not too happy about her son’s choice as he had grown distant from his mother because of the actress.

That doesn’t seem to be true now if Ayesha’s comment on Disha’s latest Instagram picture is anything to go by.

So the actress recently shared her picture in a swimsuit standing on a boat on the beach.

And it’s not just us, even Ayesha found it too hot and had a special way to describe it.

She called Disha a ‘Wonder Woman’, alongside with multiple heart emojis. 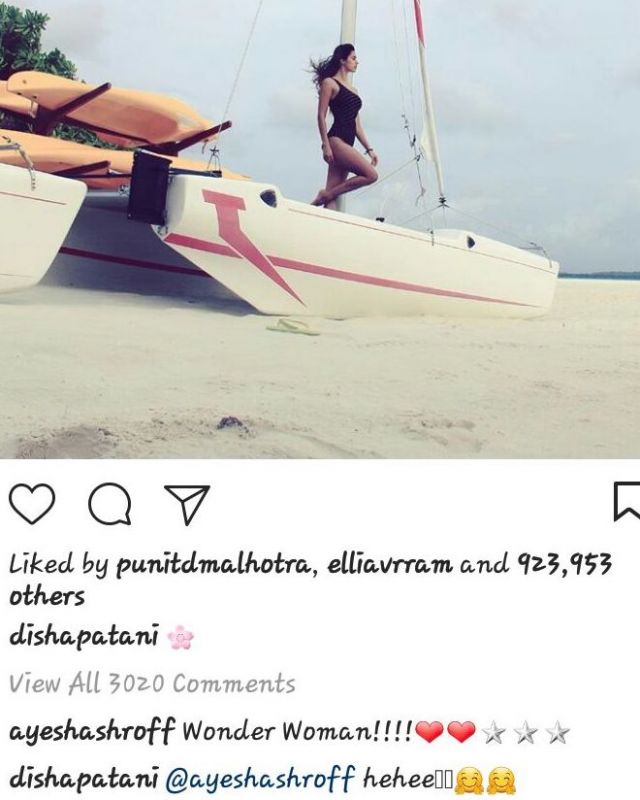 We wonder what Tiger had to say about this, the bonding as well as the picture.