Mumbai: Actress Deepika Padukone says she is in ‘state of shock’ over the attack on director Sanjay Leela Bhansali during the shooting of his directorial venture ‘Padmavati’ in Jaipur.

The 31-year-old actress, who is playing the lead role of Rani Padmavati in the film, expressed her anger in a series of tweets.

"In a state of shock! deeply saddened and disheartened by yesterday's events!#Padmavati," Deepika wrote.

The actress assured that the team behind the film is not distorting any historical facts and their aim is to bring on-screen the story of ‘courageous and powerful’ Padmavati.

"As Padmavati I can assure you that there is absolutely no distortion of history.#Padmavati.”

"Our only endeavour is & has always been to share with the world the story of this courageous & powerful woman in the purest form there is," she wrote. 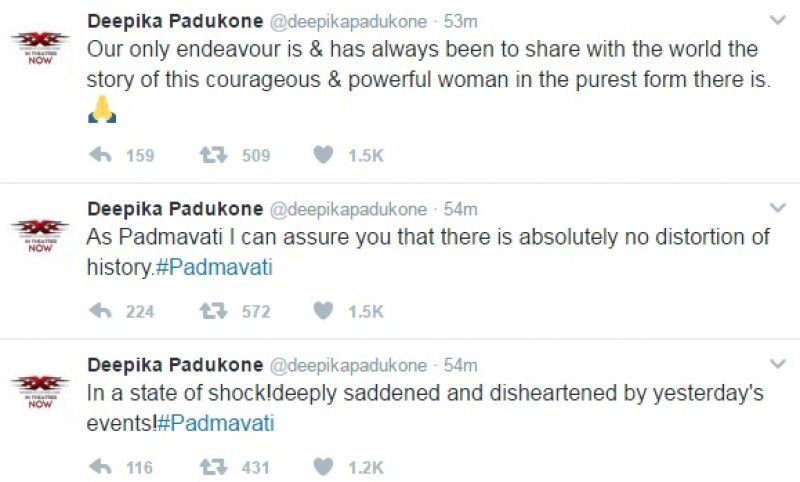 Bhansali, was shooting for his new film in Jaipur's Jaigarh Fort, when he was assaulted by activists of a Rajput community group, Karni Sena, who also vandalised the set and stalled the shooting.

None of the stars were present at the shooting location when the incident occurred. Bhansali was filming with the secondary cast.

‘Padmavati’ is set to hit the theatres in November this year.

The director is yet to react on the incident that has angered the entire film industry.