That was quick! Deepika reacts to Katrina-Anushka's 'not a good friend' jibe

Thanks to Deepika, all seems well, or does she believe she has the last laugh with the best of numbers and best of films in her kitty?

Mumbai: Deepika Padukone is a sport and also not one to shy away from appropriate candour.

The actor who has pretty much been the top actress of the industry for two years straight, has often been the subject of a lot many jibes across the industry.

Recently, when Katrina Kaif and Anushka Sharma appeared on Koffee with Karan, the two during a particular segment, quite conclusively implied that Deepika Padukone is not a good friend of theirs.

While Katrina has a personal history with DP, having dated her ex Ranbir Kapoor, Anushka's is more a stark absence of a personal equation.

However, Deepika, who is currently living the queen's life, portraying 'Padmavati' on Sanjay Leela Bhansali's ginormous set, reacted like the sport she is, complimenting Kat and Anushka on their fun session. 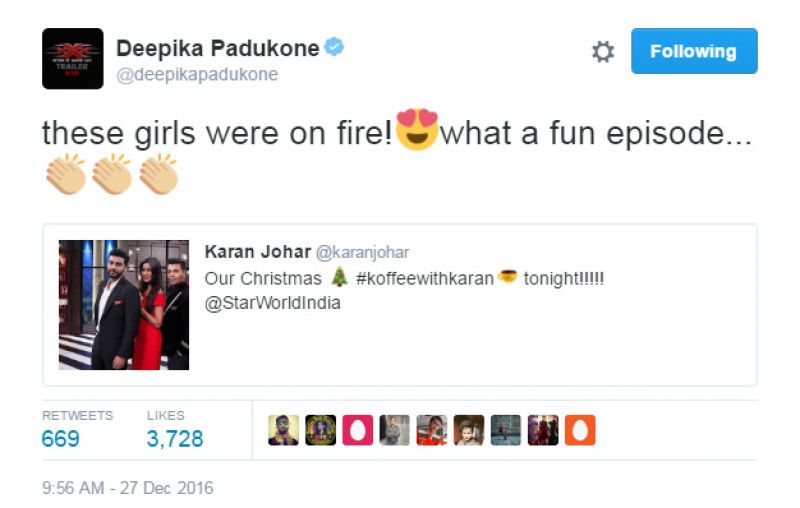 Karan, who had been at his spicy best, asked the two if they consider Deepika Padukone a good friend, during his customary round featuring Arjun Kapoor.

Pat came their response; not kissing Arjun’s awaiting cheeks with a vehement no for an answer, much to the Kapoor lad’s dismay.

Their collective expressions, reeking of indifference, seemed to suggest a telling scenario.

Thanks to Deepika, all seems well, or does she believe she has the last laugh with the best of numbers and best of films in her kitty?

■Deepika Padukone a good friend? Not for Anushka Sharma and Katrina Kaif
■'Salman is grumpy and Shah Rukh is witty': Anushka and Katrina on KWK
■Karan used to touch me inappropriately during making of ADHM: Anushka
■Did Salman Khan blast at Varun Dhawan for checking out Katrina Kaif?