Hyderabad: In its sixth convocation ceremony held on Monday, Maulana Azad National Urdu University conferred the honorary degree of Doctor of Letters on Bollywood actor, Shah Rukh Khan and industrialist Sanjiv Saraf, known for his passion and promotion of Urdu language and literature.

President of India Pranab Mukherjee was to be the chief guest at the convocation but was kept away by unforeseen circumstances. Governor E.S.L. Narsimhan who was to be the guest of honour, also could not attend the event.

Accepting the honorary doctorate, the actor said it was a proud moment for him as his mother was from Hyderabad and his father had a deep love for the Urdu language.

He urged the students to follow their hearts. “Jazbaa (passion), bal (hair) and brain cells decrease as you age. So, do what your heart tells you to do. If you do not follow your heart, you will regret it when you grow up,” he said. 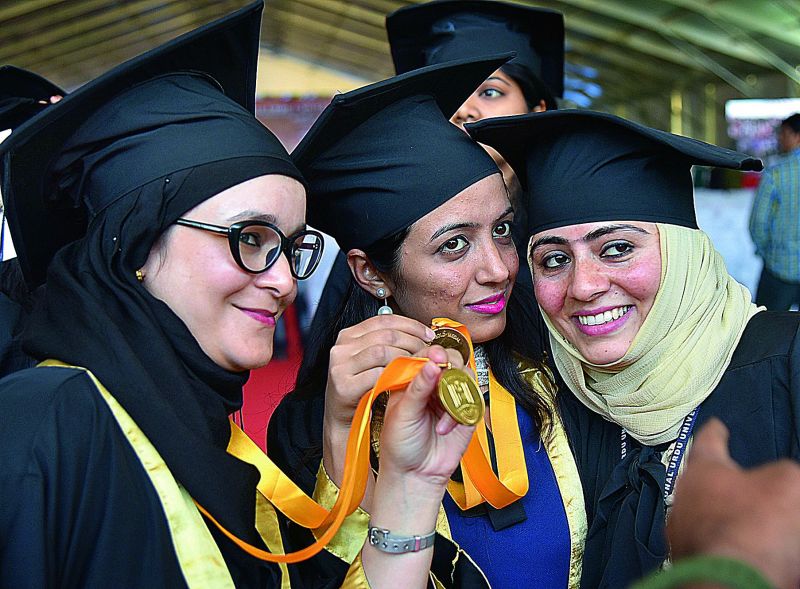 Students celebrate after their 6th convocation at Gachibowli in Hyderabad. (Photo: DC)

Recalling his early circumstances, Shah Rukh Khan said his father could not afford birthday gifts so he gifted the old things he owned. Through these old items, such as a broken chess board, a typewriter, and a broken camera, he had learnt the lessons of life.

“Chess taught me that every person in life holds equal importance, that sometimes to get ahead in life you have to take a step backward. It taught me cooperation and the importance of sacrifice. A typewriter does not have the feature to delete a typed word so I learnt that whatever you do in life do it with diligence, as if you are not going to get a second shot at it. The broken camera, which used to click poor pictures taught me to keep creativity alive. No matter how poor it is, when you are having a bad time it will help you get through,” he recalls.

He said that when he is alone he writes poetry. He advised the students to always have a sense of humour, to learn to take criticism with a pinch of salt, and to remember that teachers who were strict with them loved them the most.

Mr Sanjiv Saraf, founder of the popular Urdu literature website rekhta.org spoke in pristine Urdu. He stressed the need for digitisation to protect and conserve Urdu literature. His e-library has 23,000 e-books in Urdu.

Mr Saraf spoke of how Urdu is not restricted to one religion or culture but is a culture in itself, taking in vocabulary from a variety of languages like Awadhi, Arabic, Turkish and Persian.

University Chancellor Zafar Younus Sareshwala presided over the convocation and awarded degrees to 2,885 graduates and post-graduates, 276 M.Phils and PhDs to those had completed their course between 2013 and 2016. Degrees were given in absentia to 44,235 students who pursued various courses in distance learning.

■Hyderabad: As event was on, ‘hot’ SRK removes gown