Mumbai: While it is a known fact that Akshay Kumar is a fitness enthusiast, as is evident with his fit physique since the beginning of his career, the superstar has also promoted various forms of sports in the country. The actor has supported various initiatives related to fitness and had stressed on the importance of teaching martial arts and other types of self-defence training to women.

He has also has set up a championship for the martial arts form of Kudo on his name and the eight edition of the championship was recently held in a grand event.

Akshay later took to Twitter appreciating the performance of the participants, also sharing pictures from the event, one of which sees him performing a Kudo move with Ranveer Singh and Shiv Sena Yuva Sena president Aaditya Thackeray. 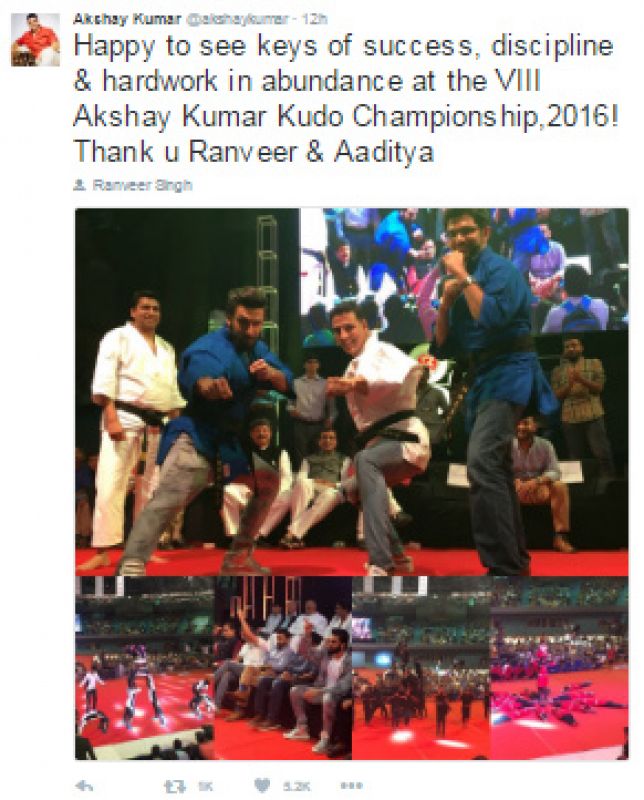 Ranveer is also known for his physique and for transforming himself brilliantly for his roles and so seeing two fitness-conscious superstars perform a Kudo move is definitely a pleasant sight for the fans.

■Akshay Kumar to collaborate with Rajkumar Hirani for new project
■Watch: Akshay films his highly anticipated cameo for Taapsee's Naam Shabana
■Akshay Kumar to star in Abbas Mustan's next film?
■Ranveer Singh just found himself a beautiful wife you all will approve of!
■Watch: The making of Ranveer-Vaani's Nashe Si Chadh Gayi wasn't a cakewalk