This ‘ungli’ is at society that's asking us to repress our voice: Ekta Kapoor

The entire cast of the film at the trailer launch in Mumbai. (Pic: Viral Bhayani)

Mumbai: On Tuesday, after creating waves across social and mainstream media, the trailer of the film ‘Lipstick Under My Burkha,’ finally saw the light of the day.

We've heard of films being passed with 'A' certificates, but not once did we hear that a trailer too has been certified as 'A' grade. It hurts to see that an Indian film which has received appreciation and accolades on global platforms has to face endless legal hurdles to get the film released in its home country.

Present at the event were producer Ekta Kapoor, director Alankrita Srivastava, Ratna Pathak Shah, Konkona Sen Sharma, Aahana Kumra and Plabita Brothakur. Barring Ekta, everyone donned a white tee which read, "It takes balls to be a woman (with balls stroked in red)"

The event began with asking Ekta about what drove her towards this film as a presenter, the TV empress said, "I saw the film with a lot of thought process that it will be substantious, arty, but then I saw this very strong and entertaining film. Prior watching this film, I never had an honest conversation with myself. We are so scared, it's now become second nature to us, being shy about our own simplest sexual fantasies. It's like it's not allowed. This film stared at me and asked as a producer you will make a financial decision, but as a woman it's time to make a decision by heart." 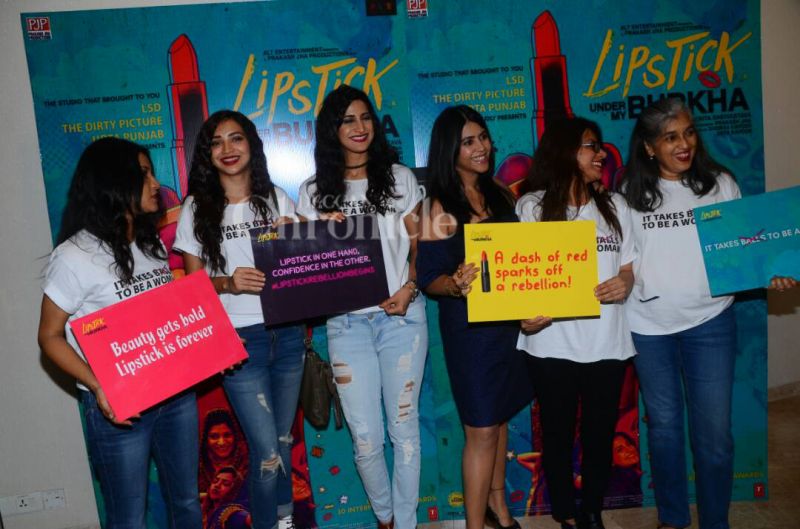 After the Central Board of Film Certification (CBFC) refused to clear the film, the makers approached Film Certification Tribunal (FCAT), which guaranteed its theatrical release rights with some cuts and an ‘A’ certificate, mostly related to the sex scenes, at their own discretion but unavailability of a buyer compelled them to keep the film on hold.

Ekta Kapoor's Balaji proudly presents this socially relevant yet commercially entertaining film, after it released ‘Love, Sex Aur Dhokha’ which was bold, edgy, ahead of its times and created ripples amongst audiences across India.

She further said, "This lipstick, this ungli is at the society who is asking us to repress our voice. It's not about CBFC or men. It's an ideology. There are lots of women who put their daughter-in-laws though a lot of abortions just to get a boy. It's an ideology. We are not being able to discriminate between sexual intentions and sexual crime. Morality is a personal issue. It is not at one point exploitative, the film. It speaks as it is and it stares at you in the eye. This is a film that's very close to my heart and I will do whatever it takes to make it big! " 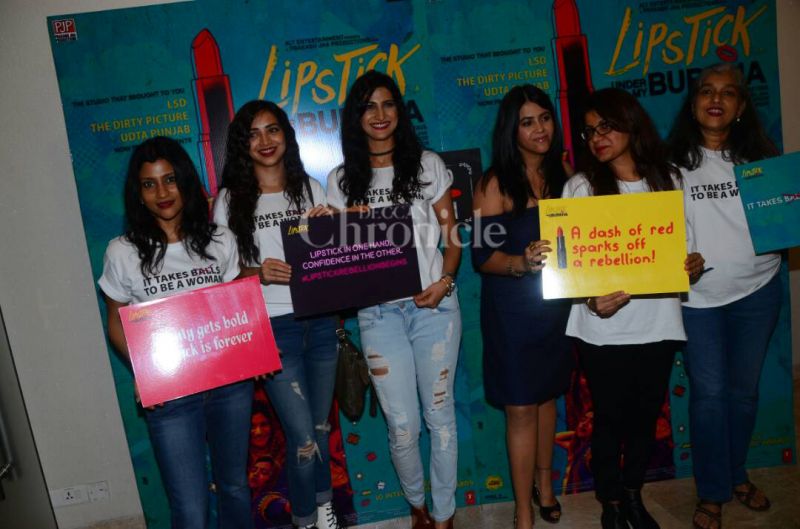 Revealing further about the tiff the film's makers and CBFC had, Ekta said, “I don't have any issue with CBFC. I have a problem with society, it's a big issue that a woman has to prove herself everytime. If she is a smart woman, if she is beautiful, the poster is for the society, and if it's about ideology, it is patriarchy."

Talking on the same lines actress Ratna Pathak Shah said, "I grew up in a generation where we had to fight but my mother gave me the freedom in life that nobody else got. And now I can't give it to my daughter because of the society. We all have to accept that we have a role to play men and women. It's about patriarchy.

Sex is a small part of this film, important but not big. There are a lot of other issues. The controversy says that its a dirty picture. Infact who comes for this movie looking at it like that. Will be highly disappointed.

Also, Konkana Sen Sharma added saying, "I think that a lot of us take for granted the kinds of struggles that women have gone through in the last 100 years. We don't know how much progress we have made in the last 100 years. This film stands by what it says and speaks very honestly about women and their inner lives. I believe that the youth will respond to the authenticity and integrity that the film follows."

Featuring Konkana Sen Sharma, Ratna Pathak Shah, Aahana Kumra and Plabita Brothakur, the film follows four small town Indian women between the ages of 18-55 - A Burkha clad college girl, a young beautician, a mother of three and an aging widow - who decided to assert their personal and sexual rights.

‘Lipstick Under My Burkha’ is a new age commercial entertainer directed by Alankrita Shrivastava. It could be touted as small town India's 'sex and the city' based on four women living out their secret lives hidden from the prying eyes of society. Four feisty women chase their secret dreams of love, sex, rebellion and freedom. These are naughty women, with a passion and zest for life, despite the claustrophobia of their lives.

While the censor board refused to certify the film because it is 'lady oriented,' and contains 'audio pornography', the audiences are ready to watch and celebrate women who have sexual desires and fantasies, but are forced to veil it to fit into societal norms. Nothing helps invert this warped sense of women and their sexuality more than a film that explores female desire through humour, quirkiness and edginess in equal measure.