Mumbai: Bollywood actor Arjun Kapoor turned 34 today and on this special day, the 'Namaste England' actor spending romantic holiday with his girlfriend Malaika Arora in New York. Ever since the duo went for their romantic vacation, their fans have constantly been waiting for updates from their NYC holiday.

And guess what, birthday boy Arjun's lady love has recently shared some glimpses from their room. The 45-year-old diva shared some snaps from her from a trip in her Instagram story. In one picture, she wrote, 'up and up' and in the second one, she wrote, 'My kinda dinner.... Nyc'. 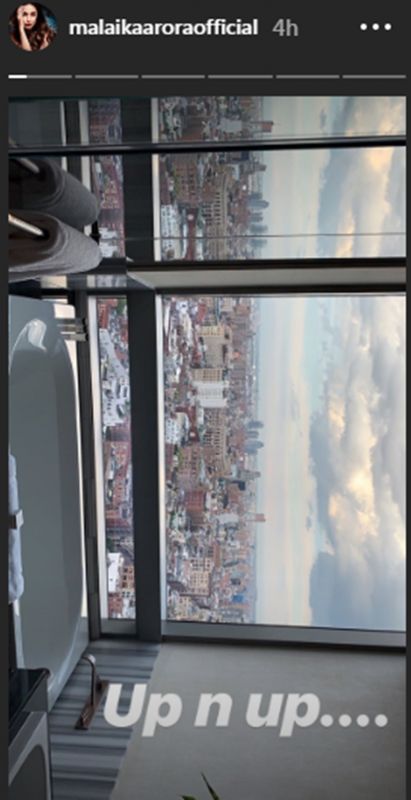 In the above pictures, one can see, Malaika captured a beautiful view of New York City from the bathtub. Apart from that, she also shared a dinner picture which can easily make her fans go crazy.

Earlier, Arjun confirmed his relationship with Malaika in an interview with Filmfare. He said, "I told them don’t sit under the house just because it looks like we’re hiding when we’re not. Let it be natural. Let it be normal. I don’t want my neighbours being disturbed, I don’t want her neighbours being disturbed. We’re not doing anything wrong. I don’t want that story being conveyed that we’re still hiding when we’re not. They understood that."

Speaking about his marriage plans, the 'India's Most Wanted' actor said, "I’m not getting married. I understand why there are speculations. Because in my own house people would ask ‘tu shaadi kab kar raha hai’? It’s a very organic Indian question. If you’re with someone for even three days, the marriage question pops up. ‘Shaadi karlo, tumhari umar ho gayi hai, abhi kitna sochoge?’ 33, for most people in India, is a great age to get married, but not for me. I still have time. If I’ve not hidden my relationship, why will I hide my marriage yaar?"

On the work front, "Arjun will next be seen in Ashutosh Gowariker's period drama, Panipat. The star cast of Panipat also includes Kriti Sanon, Kunal Kapoor and Sanjay Dutt.