It didn’t offend me at all. But one thing I know that my case is not the first. Dhanush also got the best debutant award, despite having worked in the south industry and even Fawad Khan received the award. It’s not as if something unethical happened," Diljit was reported as saying.

Mumbai: After throwing Twitterati into a frenzy with his rant over losing the ‘black lady’ to a much-deserving Diljit Dosanjh for his ‘Udta Punjab’ performance, the actor has finally come to terms with reality.

Not only did he apologise for questioning Dosanjh’s Filmfare win, Harshvardhan also professed his ‘love and respect’ for the musician-turned-actor. And, the Kapoor scion also tagged his father Anil Kapoor. 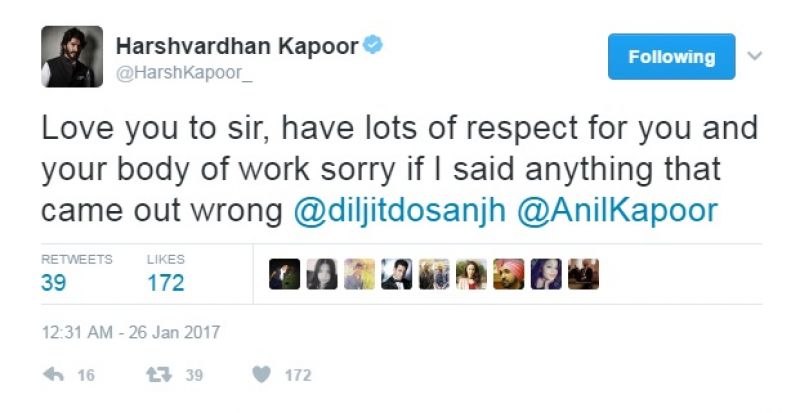 Harshvardhan Kapoor might have won a few odd Best Debutante awards this year, but the youngster was evidently unhappy about losing out the Filmfare Award for Best Male Debut to Punjabi singer-musician Diljit Dosanjh, for his acclaimed performance in Abhishek Chaubey's 'Udta Punjab'.

The actor, who's currently working on Vikramaditya Motwane's 'Bhavesh Joshi,' had told a leading daily, "Although I picked up two debutant awards earlier, I was really looking forward to winning the black lady. But I guess every awards event has its own parameters. I'll be honest, though. I think a debutant award is meant for someone working on his first film. It shouldn't go to an actor who has worked in several films in another industry or language."

If that statement wasn’t enough, the actor had taken the row to another level, by claiming that Diljit had made his Bollywood debut in a 2008 film. 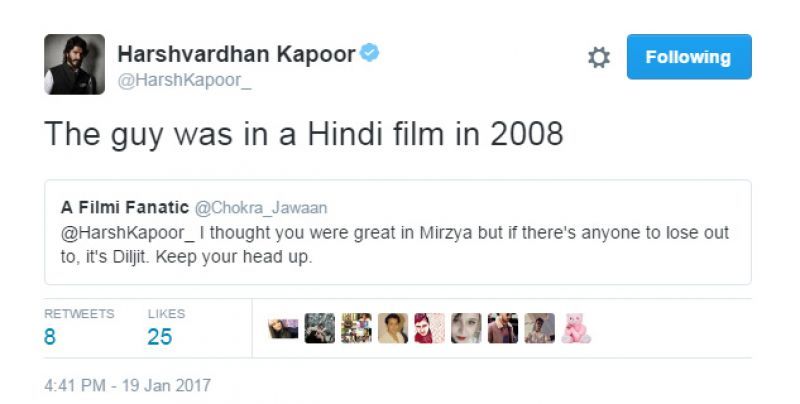 ■Harshvardhan Kapoor claims Diljit Dosanjh made his Bollywood debut in 2008

Varun’s next with Stree director