Ram Gopal Verma is back on home turf, and fans sure don't expect him to disappoint.

Mumbai: "Sarkar 3 shoot could end before schedule," Amitabh Bachchan had said, much to the delight of his gazillion fans. And now, they know exactly how soon the film is going to release.

The Ram Gopal Verma directorial, is the third instalment in one of the few franchises that still has immense recall value amongst fans.

Eros took to their Twitter feed to announce the big news, and it's been revealed that the film will be releasing on March 17, 2017. 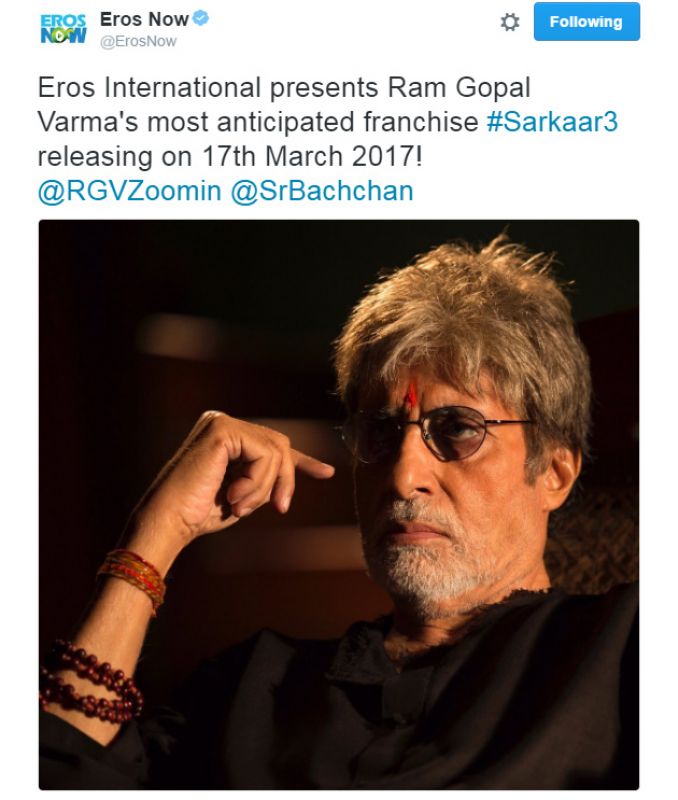 Big B, who has been filming for his on-screen return as Subhash Nagre, the intimidating political bigshot from Ram Gopal Verma's 'Sarkar' franchise, has been dedicatedly filming for part three.

The film, which has Manoj Bajpayee, Jackie Shroff, Ronit Roy, Amit Sadh and Yami Gautam sharing screen-space with Big B, won't see Abhishek and Aishwarya Rai Bachchan returning to reprise their respective roles from the prequels.

In the film, Yami Gautam plays the role of Annu Karkare, who wants to take revenge on 'Sarkar' for killing her father, whereas Manoj Bajpayee plays Govind Deshpande, a very cranky and slightly violent version of Arvind Kejriwal.

The film, slated for a 2017 release, will see Jackie Shroff as the main antagonist.

Ram Gopal Verma is back on home turf, and fans sure don't expect him to disappoint.