Yes, we all know the field day trollers have been having ever since the trailer of Salman Khan's much-anticipated sequel Race 3 was released. The action sequences and dialogues came in for a lot of flak from online trollers. But the song Hiriye which was released recently has found appreciation- especially the denim jacket that Salman wears in the song sequence. Incidentally, it is Salman himself who has hand painted the artwork at the back of the jacket.

Nothing surprising there, since we all know how good a painter he is. But the story here is not about Salman's painting prowess; instead, it is about the designer behind the jacket. He is a Thrissur -based Malayali, Jishad Shamsudeen, now working in Dubai. He belongs to the new generation of young designers who are using denim in ways never thought of before.

Jishad is a denim artist and a denim designer working of Splash fashions in Dubai and Salman has often worn Jishad's designs for awards and other functions. Jishad says, “This is the first time that I was designing for his film. The jacket is a special custom-made outfit that mirrors the theme of the film Race 3. This will be one of a kind and he wanted it to be unique”. The final product got Salman's seal of approval.  Jishad also reveals some trivia about the jacket,

"Initially, it was made with yellow tape on the sleeves but Salman thought black would look better and it was changed accordingly! Also, I got just six hours to design and make it and there were eight jackets of the same kind needed for the song and fight sequences." All the hard-work later, Jishad is a contented man. Jishad has worked with some of the top designers in Bengaluru and then moved to Dubai in 2016. There was a reason for his relocation, “I felt as a denim designer there was no space for me in Bengaluru. Coincidentally my first design was for my- now boss. I designed a denim coat for him and he gave me a job in his company!” 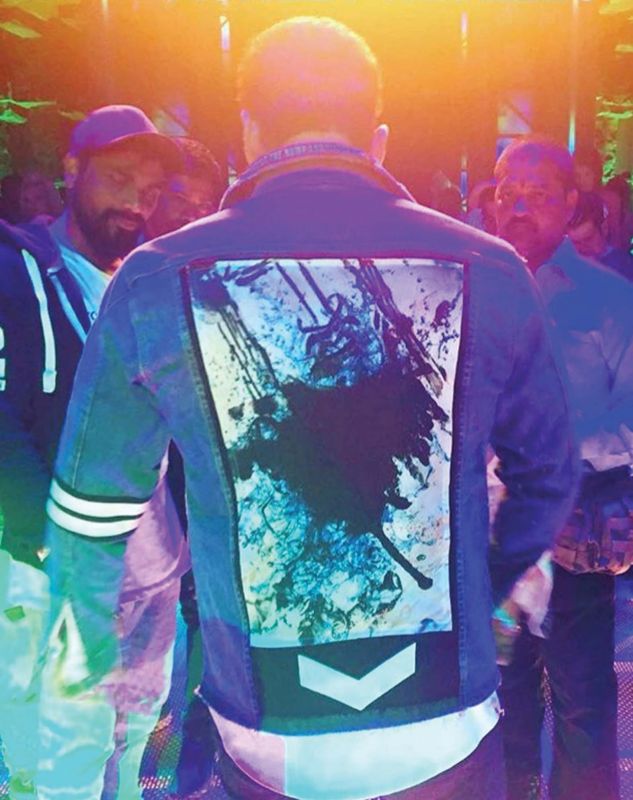 A designer who saw the endless possibilities of the familiar fabric, he has been getting job offers from big brands but he is happy right where he is. Blessed with an inherent passion for denim, he is a self-taught designer. And working with denim is not easy, “I usually work with my hands and can create a design using just one single tool. I do not repeat my designs” His USP is about using artwork and thread work in his denim styles which he does for both men and women. There is also news, “I have designed outfits for all the actors, including Priya Varrier, for a song sequence in Oru Adaar Love,” he reveals.