Arijit Singh wrote, "I apologize here In front of everyone but please it is a request Please do not remove the song that I sang for you in Sultan."

Mumbai: Speculations have been rife that Arijit Singh, who has sung a song for 'Sultan', has rubbed Salman Khan in the wrong way. Now, confirming the rumours, Arijit posted a heartfelt post on his social media handle, apologising and pleading with Salman to retain his song sung by him in the film.

Going by the post, things took a wrong turn at a recent event. Arijit tried to personally apologise several times, but to no avail.

This short clip form the award ceremony, is believed to have been the root cause of the rift between the two.

It seems that the singer had second thoughts after posting the letter as he deleted the post within an hour. Here's what he has to say. 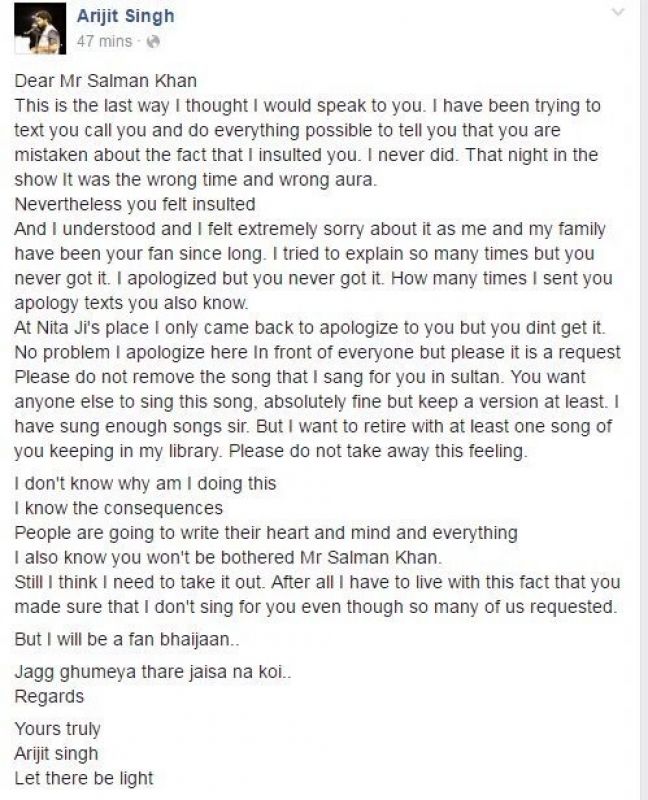 “Dear Mr Salman Khan,
This is the last way I thought I would speak to you. I have been trying to text you call you and do everything possible to tell you that you are mistaken about the fact that I insulted you. I never did. That night in the show It was the wrong time and wrong aura.

At Nita Ji’s place I only came back to apologize to you but you dint get it. No problem I apologize here In front of everyone but please it is a request Please do not remove the song that I sang for you in Sultan. You want anyone else to sing this song, absolutely fine but keep a version at least. I have sung enough songs sir. But I want to retire with at least one song of you keeping in my library. Please do not take away this feeling.

I don’t know why am I doing this. I know the consequences. People are going to write their heart and mind and everything. I also know you won’t be bothered Mr Salman Khan. Still I think I need to take it out. After all I have to live with this fact that you made sure that I don’t sing for you even though so many of us requested.

But I will be a fan bhaijaan..
Jagg ghumeya thare jaisa na koi..

Regards
Yours truly
Arijit singh
Let there be light”

After deleting his post, he wrote, “I hope he gets my letter through someway. Ps. This whole thing will backfire at me I know. Prayers.”

■Aishwarya Rai Bachchan loses her temper on question about Salman Khan
■Salman freaks out at the thought of marriage
■Salman Khan gets his trainer for Anushka Sharma
■Don’t expect me to dance like Hrithik and Tiger, says Salman Khan
■Iulia Vantur breaks her silence on marriage with Salman Khan
■Watch: Sohail Khan loses temper when asked about Salman's wedding, abuses scribe

The love I got from Salman's fans was unbelievable: Anushka Sharma