Mumbai: On Monday, singer Armaan Malik and Sonakshi Sina indulged into a furious Twitter spat; with both the parties not in the mood to give up.

After reacting to the news that Sonakshi will be performing at the opening act of Justin Bieber’s concert in India, singer Armaan reacted, “Agree with @Kailashkher sir! Actors are actors & singers are singers. Leave the stage & mic to us, that’s our playground, not yours (sic).”

This probably didn’t go well with Jr. Shotgun Sinha and she snapped back tweeting, “And this is definitely not the same tune you were singing when you wanted me to sing for you (sic).”

Later when Armaan chuckled that the actress has got him confused with his brother Amaal Mallik, Sonakshi wrote, “Of course I know Amaal is the composer but I clearly remember u both coming up to me after an event a while bk asking to do a song together, (sic),” and added, “good luck to you both (sic).”

After this entire fiasco, Sonakshi issued a statement and cleared it once and for all that she isn’t performing at Justin Bieber’s concert.

She captioned the statement on Twitter as, "Just chill chill... just chill." 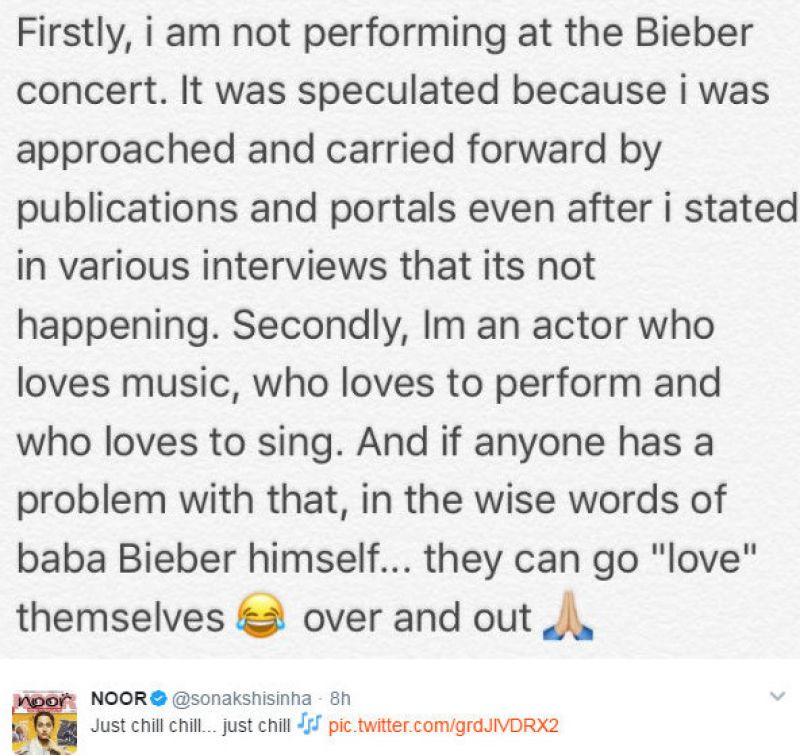 Well, let’s wait to see if the thunder stops right here; or is it just the awakening of another storm.

■Sonakshi Sinha and Armaan Malik’s war of words
■Have learnt a lot from the superstars I worked with: Sonakshi Sinha