Kangana is a class apart as she dons the Kerala saree

‘Kangna has embodied the Kerala sari like no other Bollywood actor besides Rekha’.

Airport spotting is the new sport to spot fashion trends as celebrities fly in and out of cities for shoots, appearances and holiday. It was startling to find Bollywood diva Kangna Ranaut walk out of Mumbai airport donning the Kerala sari, paired with a Birkin bag, oversize sun glasses and simple slip-ons early this week. It is not the first time Kangna has worn a Kerala sari. Her fascination for the traditional sari of the Southern state is not new and she has worn it earlier as well. “Kangna has embodied the sari like no other Bollywood actor besides Rekha and has carried it with great aplomb on many an occasion. She is a fashion catalyst in its truest sense,” says a leading stylist. “Her endorsement of the simple Kerala sari — the off-white cotton and gold zari border as a travel attire speaks volumes of her attention for style and comfort.”

It was not long ago, that on a trip to Kerala in 2009 to honour Oscar winner Resul Pookutty, Amitabh Bachchan surprised the audience present including all leading Malayalam film industry stars and actors, by walking in wearing a traditional mundu. “When in Rome dress like the Romans,” was a quip to actor Mammootty dressed to the hilt in an Armani suit who stood up to ask Bachchan why he chose to wear the “humble dhoti”. On that trip, Bachchan had an entire store transported to his hotel suite to select and buy hoardes of Kerala mundu — “this is what we wear at home” — and saris for wife Jaya and daughter in law Aishwarya. Next time around, when Resul met Abhishek he had to deal with “Pa dint get me the mundu, Resul, you better get them for me.” Such is the love for the handloom stuff. 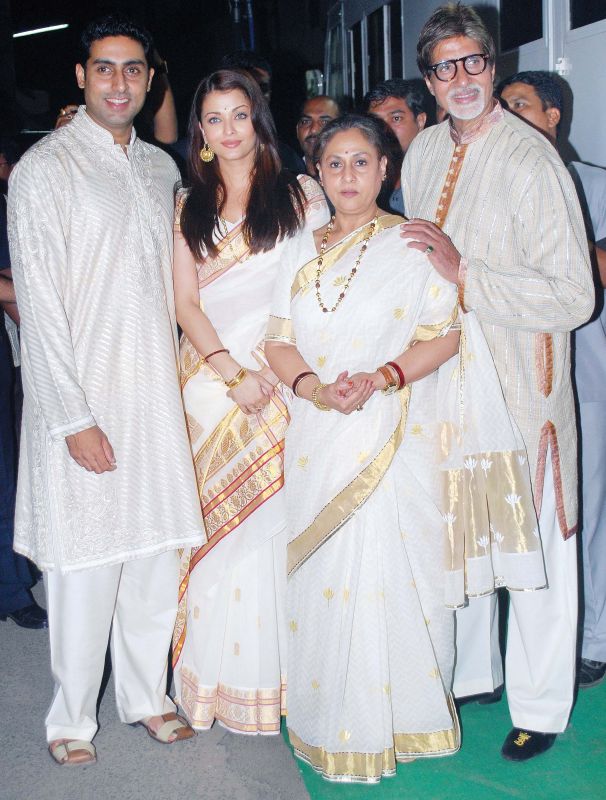 The simple mundu-neriyathu  has never found its place in the high echelons of fashion, more so with Malayalis over time disowning it for more ‘glamorous’ fashion. The young do not relate much to the off-white cotton/silk unless it’s a festive occasion or a wedding or any traditional celebration. The modern twist to Kerala handlooms came nearly a decade ago, when a young design prodigy created a line of 10 garments, after a six-month research in Kerala, under the guidance of Padmashri winner Master Gopinathan, and showed the world the textiles from Kerala can be styled in 100 different ways. It won worldwide recognition and put Kerala on the fashion runways. Rahul Mishra’s first collection, a set of reversible garments, that could be worn two different ways, was to support an ecosystem, giving a choice for travellers to carry less garments, wear something suitable for the humid climate of Kerala and also support local economy. It worked and he went on to do another collection of 50 odd garments for another showing at a fashion week a few years down the line.

Many designer has interpreted and styled the Kerala fabric in myriad ways ever since. Kerala based NID graduate Srijith Jeevan who retails under the brand ‘Rouka’ has made multiple collections with handlooms from the state. Poorinma Indrajit’s last festive line ‘Aanachandam’ celebrated the handlooms of Kerala; other emerging brands too are experimenting now with various forms. In an attempt to appeal to the young generation, the local weavers have experimented with hand painting, and creating ‘dress material’ out of the conventional textiles.Fashion glossies have been fascinated with the simplicity and richness of the sari , glorified through the paintings of Raja Ravi Verma as ‘nivi sari”. The mundum neriyathum was modified in several of Varma’s paintings depicting Shakuntala from the Mahabharatha to a style of draping now popularly known as the ‘nivi saree’ or ‘national drape’. In one of his paintings, the Indian subcontinent was shown as a mother wearing a flowing nivi saree.

“There is something spiritual about the Kerala sari, and the way it’s worn traditionally,” says actor Deepika Padukone, who wore them on screen for Chennai Express and while shooting in Munnar. Besides Malayalis — Asin, and Vidya Balan , actors like Shilpa Shety, Rani Mukherjee, Jacqueline Fernandes, and Sonam Kapoor have adorned the cream and gold saris on various occasion onscreen and offscreen. The Bachchan family though has been loyal ambassadors wearing it on many occasions. And their association with a jewelry brand from Kerala has ensured they wear it on screen as well. “It gives a new lease of life to the struggling handlooms in Kerala. Every endorsement at a national level gives rise to demand, and also legitimacy to the young of Kerala that it’s fashionable to wear something so pure and simple that is bereft of any embellishments or surface treatments and yet can be the centre of attention” remarks Rahul Mishra.