Alia was last seen in her critically acclaimed 'Udta Punjab'.

Mumbai: Pooja Bhatt had a reigning run through the 90's and starred opposite most young, emerging stars from then, including Shah Rukh Khan. 'Chaahat,' made in 1996, had the two starring opposite each other.

And, twenty years down the line, now her kid sister Alia will be starring alongside the superstar in Gauri Shinde's 'Dear Zindagi'.

Alia, incidentally, was a cherubic toddler when her elder sister was filming with her childhood crush.

And Pooja, realising the absolutely adorable turn of events, decided to share a goldmine of a throwback image on her Instagram feed, of her posing with her baby sister, from the sets of 'Chaahat'. 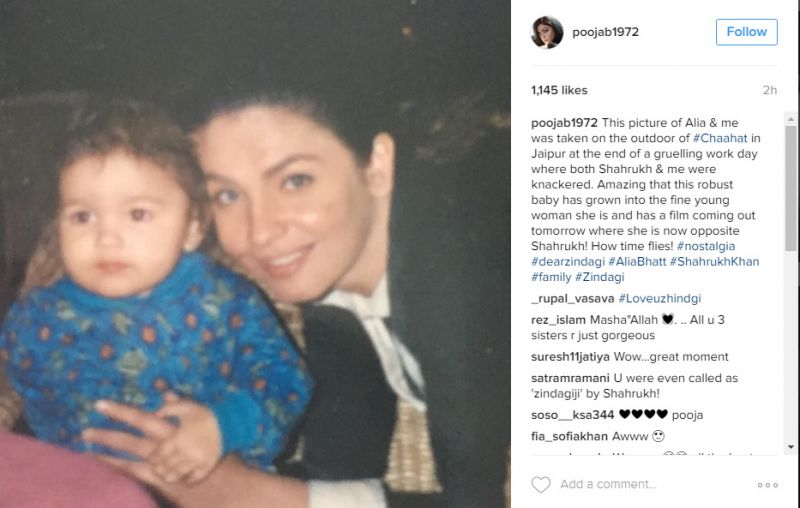 Alia, a surprisingly gifted natural, despite being stereotyped as an industry kid who's had it easy, shocked the industry with her achingly credible performance in Imtiaz Ali's 'Highway', which was just her second film. She then came back to shock them even further with her phenomenal act in 'Udta Punjab', a role that was diametrically detached from her own actual reality.

But fans who were craving to see her in a lighter breezier role, closer home, were delighted when the teasers and snippets from 'Dear Zindagi' started coming out.

When a film is made with energy as that, it is bound to translate onto the screen.

The film is slated for a November 25 release.