Maanayata Dutt came without her superstar husband to the do.

Mumbai: Vicky Kaushal burst out to immense critical acclaim with Neeraj Ghaywan's 'Masaan,' and followed that with his abusive cop act in Anurag Kashyap's 'Raman Raghav 2.0'.

However his name was never associated with a marquee film until Sanjay Leela Bhansali approached him to play Deepika's righteous king, Rana Rawal Ratan Singh. However, that didn't work out.

But if Maanayata Dutt's latest Instagram post is anything to go by, the talented actor could just have landed a highly prestigious project.

Maanayata shared a picture of herself alongside Ranbir Kapoor, Vicky Kaushal and Rajkumar Hirani, from Raju's birthday celebrations.

As has been widely known, Raju Hirani will be helming the enormously anticipated Sanjay Dutt biopic, with Ranbir portraying the star on-screen.

But Maanayata chose to caption the picture as '#teambiopic'. 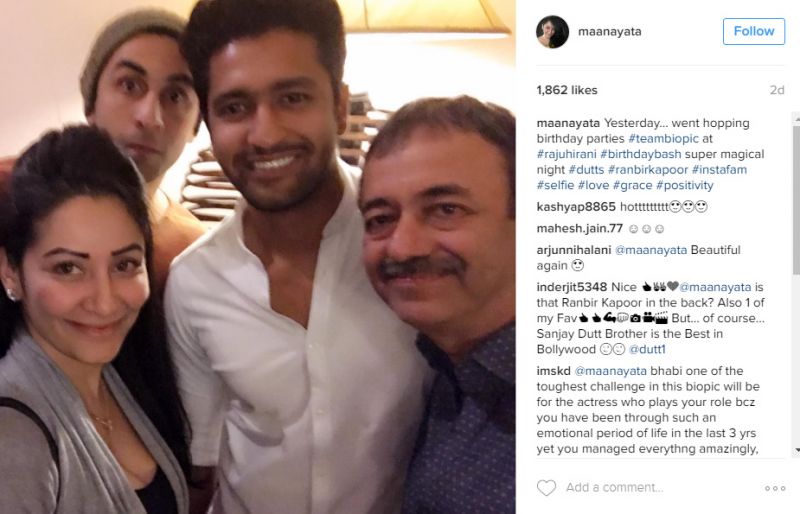 Well, if that's any indication, Vicky could be seen playing a pivotal character in the film, and it could prove to be career defining for the young actor.

Earlier, Sonam Kapoor and Anushkar Sharma were confirmed to be a part of the film. Aamir Khan's name had also been doing the rounds in association, reportedly to play Sunil Dutt.

Ranbir has already commenced preparations, and is all set to shed some major kilos and grow his hair long.