Mumbai: Subhash Chandra, Chairman of the Zee Media Network and Rajya Sabha MP, has stated that the company is planning to stop the telecast of Pakistani shows on their channel Zindagi. He even asked the actors from the neighbouring country to leave.

His decision is in the wake of the comments of Pakistan PM Nawaz Sharif at the UN General Assembly on the deadly attacks by militants in Jammu and Kashmir’s Uri killing 18 Indian soldiers. Sharif’s speech at the assembly has been slammed by India for glorifying militant Burhan Wani. 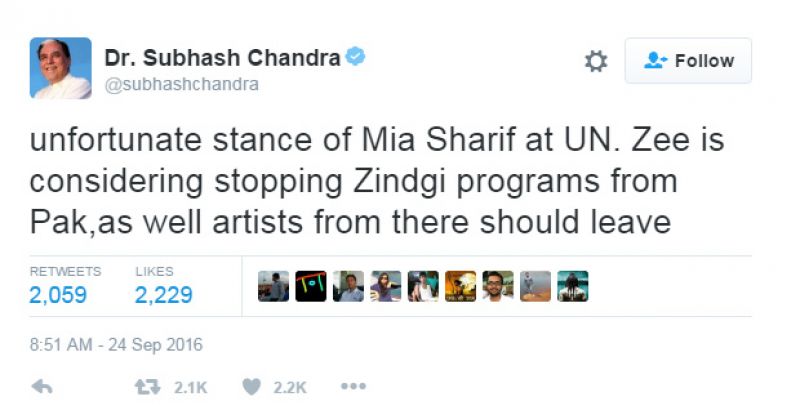 The television channel Zindagi consists of Hindi and Urdu shows from Pakistan, Egypt and Turkey. Some of the Pakistani shows on the channel like ‘Zindagi Gulzar Hai’ and ‘Humsafar’ featured Fawad Khan, who is currently featuring in numerous films in Bollywood.

Maharashtra Navnirman Sena had given Pakistani actors and artistes 48 hours time to leave the country in the wake of the attacks and had threatened to stop the release of films like 'Ae Dil Hai Mushkil' and 'Raees' for having Pakistani actors like Fawad and Mahira Khan.