Comedienne Jamie Lever has made a mark for herself in the industry based on her own talent, but she admits that the audience has accepted her with a lot of warmth due to the love her father Johnny Lever commands. She declares that her dad is not just her dad but a guru, manager and mentor.

However, initially her father had wanted her to stay away from the limelight, says Jamie. “My parents wanted me to do the usual stuff — get an education, pursue graduation, then post graduation and enter into a secure job. And I successfully, obediently and diligently did what they had asked me to do. But, I also used to participate in all sorts of extracurricular activities since a young age. To my happiness, people used to enjoy my acts. However, my parents never acknowledged or encouraged me to think about it seriously. So, I kind of left it as a secondary thought till I went to London,” she laughs, adding, “That place became my playground to experiment as I used to attend gigs, plays and stand-ups. So, when my father visited London on one of his tours, I sat him down, and told him that I wanted to be an entertainer.”

Comedy runs in her blood, but ask her if it is a huge part of their off the camera lives too and she says, “Oh, yes. All day, everyday. My dad has a habit of going online and searching for new jokes. Then if he likes a joke, he reads it out loud in front of us and we sit and discuss things like how the writer must have written it, what must have gone through his head at the time of writing, the usage of words, puns, language, whether the joke could have been written in any other way to make it more effective, etc. In short, it’s like a biology class on the new comedy with Professor Johnny Lever!” Jamie, who has shared screen space with actor-comedian Kapil Sharma in his debut film Kis Kisko Pyaar Karun, is currently hosting Sony TV’s kid’s reality show Sabse Bada Kalakar. “I am currently also in the ideation stage for my web series, which will be based on my own life, my struggles, my relationship with my family, etc.” 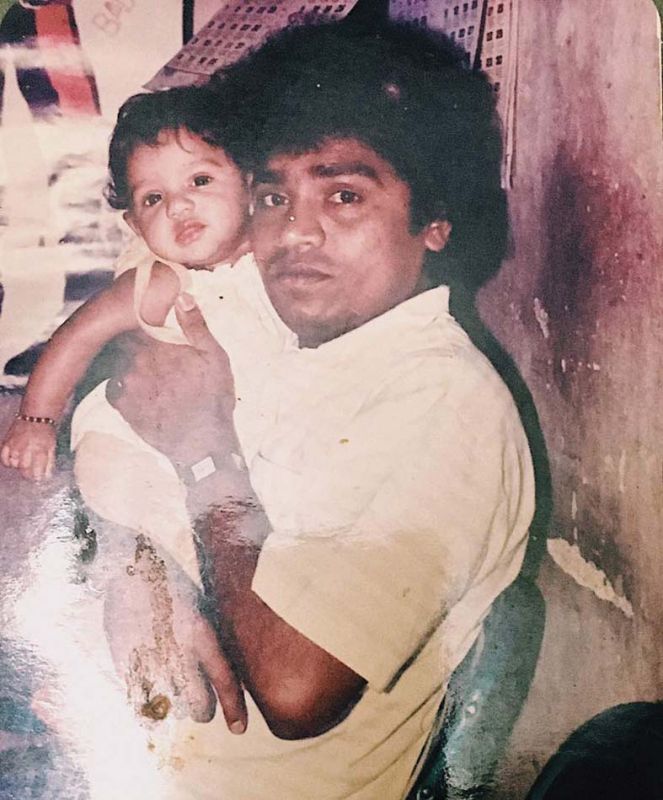 Jamie with her dad Johnny Lever.

Coming from a filmy background, Jamie has seen the world of showbiz closely. Talking about comedians’ place in Bollywood in present times, she shares, “B’wood has evolved in the sense that there is no place for comedians separately anymore. Barring a few movies — like let’s say Golmaal, wherein a comedian gets to do his own act — if you observe closely, everywhere, the lead actor himself/herself indulges in situational comedy. That’s why I feel there is no space specifically for a comedian. People need an all-rounder these days, which is why I am also preparing myself as an actor more than just a comedienne.”