Mumbai: Bollywood's leading lady Deepika Padukone is touted as the sexiest woman in Asia, crowning her as the sexiest actress in Bollywood fans shower their love on the actress and Ranveer Singh couldn't agree more.

As Deepika Padukone shared BTS pictures from one of her photoshoots, fans poured in their love with comments regarding her as the sexiest actress in Bollywood. While fans flooded her comments section, Ranveer Singh also didn't miss a chance to appreciate the actress.

Here's how Ranveer Singh shares his excitement," 🔪 killin me " but the fans crowned her as the sexiest actress by starting a poll," WHO ELSE THINK THAT Deepika padukone is the most sexieSt actress in BOLLYWOOD 🔥🙌🔥.... " 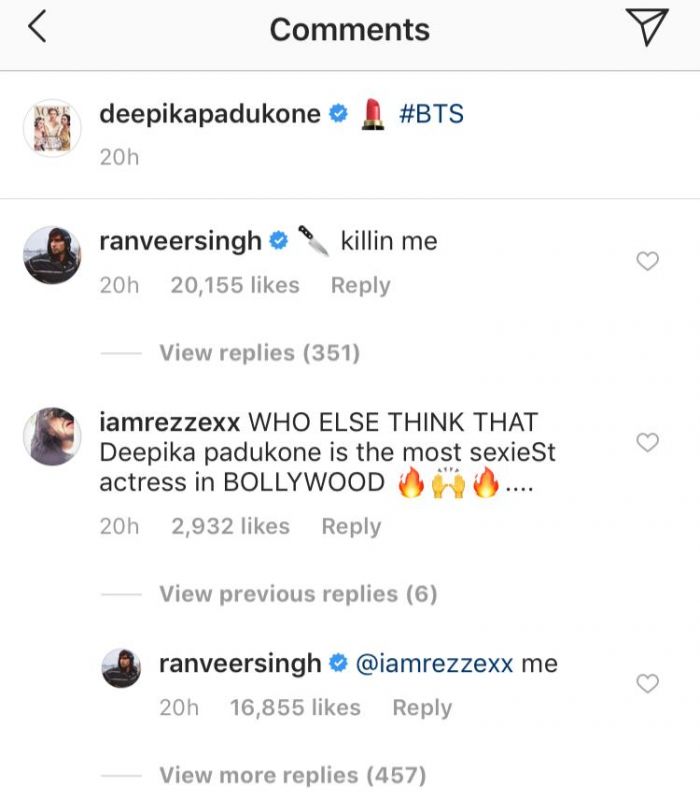 Achieving one feat after another, Deepika Padukone is the indisputable queen of the box office with numerous films of 100 crore club as well as 200 crore club. The actress is winning the B-town by her charms and her fabulous performances.

Deepika is currently leaving no stone unturned in getting into the skin of her character embarking an emotional journey of Malti with Chhapaak as she slips into the shoes of an acid victim survivor.

The upcoming film of the actress demands her to feel and live the life of an acid attack survivor touching upon all the adversities the victim feels as Malti.

After bringing to screen the courage and valour of Rani Padmini in Padmaavat, Deepika Padukone personifies another tale of bravery and human spirit with Malti. Drawing instances from the life of Laxmi Agarwal, Chhapaak is a story of the strength and integrity of a woman.