Sonakshi hits back at Armaan for 'actors are actors and singers are singers' comment!

What followed was even messier than the first tweet that led to the entire heated conversation.

Mumbai: Ever since the news about Justin Bieber coming to India went out, fans have been waiting patiently for the anticipated gig, which will be held at the DY Patil Stadium in Mumbai on May 10.

Recently, it was revealed that Sonakshi Sinha will be the opening act for International pop sensation Justin Bieber at his upcoming concert in Mumbai. While her fans had a moment of joy, many disapproved the decision, Padma Shri award-winning singer and composer, Kailash Kher being one of those.

In his interview, Kailash had said that bringing Sonakshi on board to perform at the concert rather than having any other acclaimed Indian singer, is a bad sign and sends out a wrong message internationally.

Armaan Malik, who has crooned songs like ‘Bol Do Na Zara’, ‘Wajah Tum Ho’, ‘Sau Aasmaan’ and many more songs, agreed with Kailash’s opinion by sharing his views on Twitter.

“Agree with @Kailashkher sir! Actors are actors & singers are singers. Leave the stage & mic to us, that's our playground not yours,” he wrote.

When a fan asked “But when you can do both..why not?” Armaan replied by saying, “Sure everyone deserves to do whatever they're good at but give the actors a microphone & tell em to sing live I'm sure you'll get ur answer.”

However, this didn’t go down well with Sonakshi Sinha, who instantly shot back at Armaan by saying, “A secure artist wud always encourage another artist to grow their skills and follow their dreams. Art in any form should not be suppressed.” 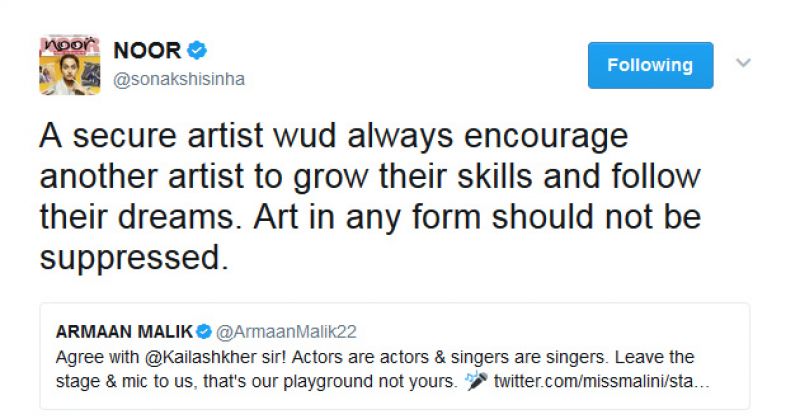 To her tweet, Armaan humbly agreed and put forth the trouble singers go through in the country. “I Agree with u sonakshi.. but I voiced what I felt about how singers are shunned in our country & given lesser importance than actors!!,” he wrote. 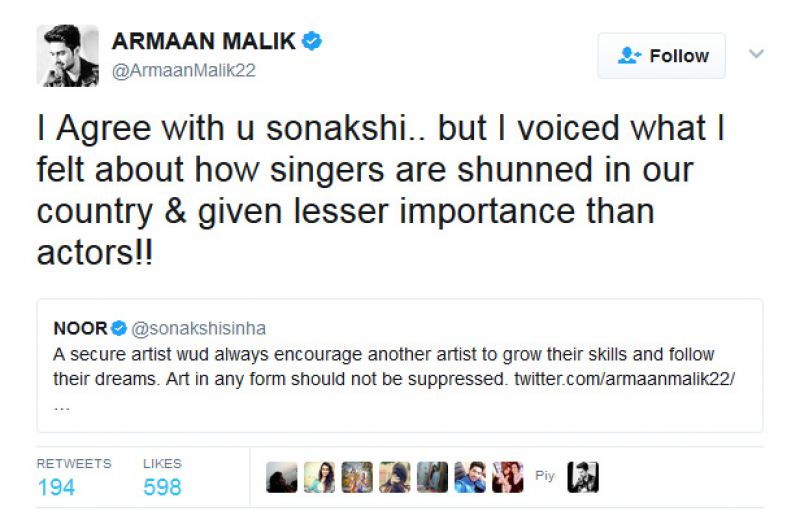 Moving forward, Sonakshi even tried to shame Armaan by claiming that he didn’t have a problem with her singing when he approached her for collaboration. “And this is definitely not the same tune you were singing when you wanted me to sing for you,” read Sonakshi’s second tweet.

But Armaan wasn’t buying any of it. “You are mistaking me for @AmaalMallik he is the composer :),” came Armaan’s reply.

What followed was even messier than the first tweet that led to the entire heated conversation. 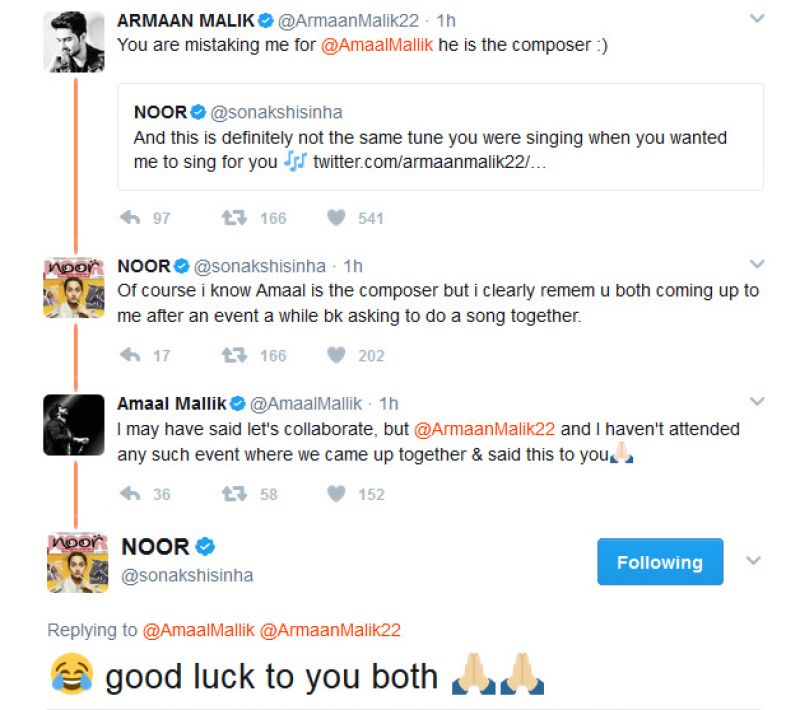