Disha Patani at one of the awards shows held recently.

Mumbai: The recent abduction and molestation of a Malayalam film actress few days ago has shocked the country and the actress was lauded for raising her voice and filing a complaint against the offenders.

And another actress, who was also subjected to sexual harassment, this time, through online abuse, has given it back to the trollers.

Disha Patani, who wore a ‘revealing’ outfit at a recent film awards show, also posted those pictures on her Instagram account.

However, Disha received several unpleasant comments for her ‘exposure’ and got a lot of ‘advice’ regarding the expectations from an ‘Indian girl’.

Fed up with the comments on the pictures, Disha posted on Instagram a heartfelt message questioning the mindset of some of the users who posted those objectionable messages.

In the post, she termed ‘shameful’ how people did not know the boundaries between being a human and an animal. The actress also says that it was easy to judge girls on the basis on how much they cover up their skin but questioned the ‘cheap mentality’ in staring at those ‘inappropriate places’ they were asking her to cover up.

She concludes by saying that she doesn’t fit the definition of the ‘Indian girl’ and asked them to stop the hypocrisy and open their minds. 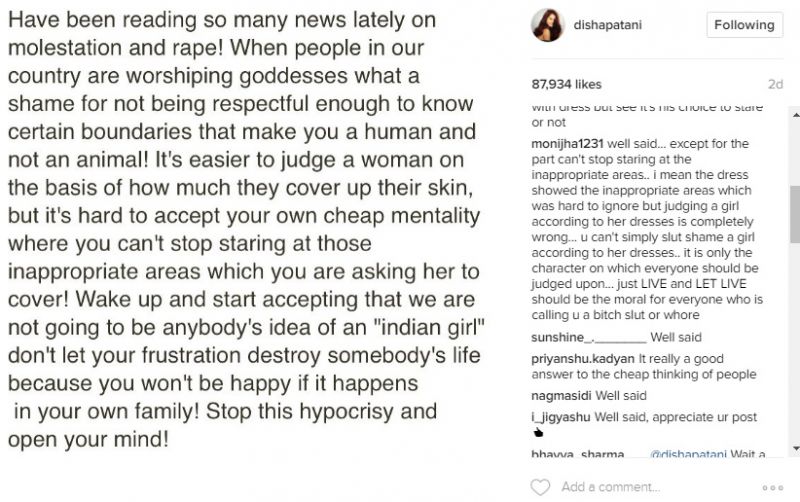 Disha is definitely not the one to hold back.