Varun Dhawan scared of shooting with ‘Pari’ Anushka, is gushing over Banita Sandhu

Varun Dhawan on the sets of 'Sui Dhaaga'.

Mumbai: Varun Dhawan is shooting for ‘Sui Dhaaga: Made In India’ with Anushka Sharma. The actress is currently in the news for venturing into horror with ‘Pari’, and it looks like she has managed to even scare her co-star.

Varun shared the latest poster of Anushka as ‘Pari’ and he definitely appears scared of her. Sharing the same poster on his Instagram story, Varun captioned it, "Shooting with her." See his post: 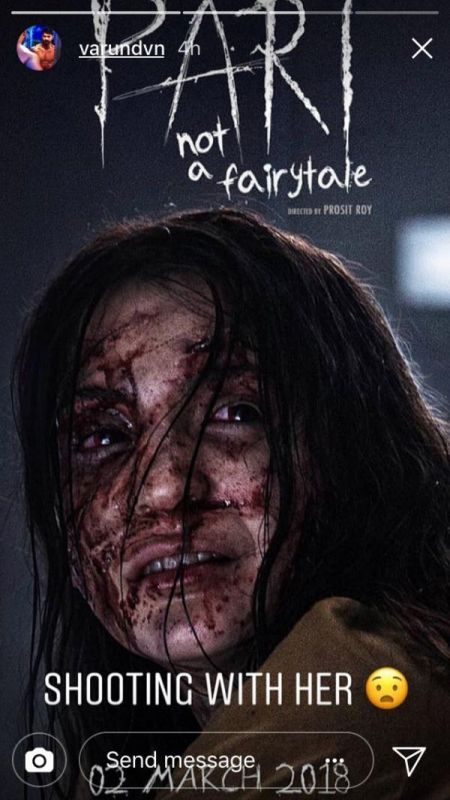 The actor himself is also promoting ‘October’, which is directed by Shoojit Sircar. Varun, it looks like can’t get over his co-actress Banita Sandhu. In a chat with Pinkvilla, the actor ended up saying that he’s fond of her and she took care of him.

"Banita is someone that I'm so fond of. I can definitely say that she's done an incredible job. The amount that she has given to this film, very rarely an actor gives that. You give so much and then there's that extra percentage where you don't give because it can harm you also. But, she went for it. If I had to give people credit, I'd give dada (Shoojit Sircar) obviously, Juhi and I will give credit to Banita also for myself in the film because if it was not for her, if it was not for her eyes, if it was not for her soul, I would not be able to be me in this film," the actor stated.

Varun revealed, "I started off wanting to be very protective of her because she is just 20 years old. She was small on set, everything is new to her. But, by the end, she was taking care of me. Not that I am a baby or anything like that (laughs) but honestly, by the end, the kind of connection that we got... that we always wanted to look out for each other. I would be so worried about her during certain scenes and she would be like, 'Varun, I got this, don't worry! I'm fine.' And I would be like, what is this girl made of? Because seeing her, this is happening to me, I just hope that she's okay. I'm excited for people to see her in this film."

■Like Sonam and Deepika, Varun Dhawan and Amy Jackson to get married by year end?
■Varun reveals director he wants to work with again and again, still part of wishlist
■Sui Dhaaga: Varun Dhawan, Anushka Sharma are all smiles with lots of Chanderi sarees
■Is Varun Dhawan starrer Rannbhoomi a revamped version of Karan Johar’s Shuddhi?