Ranveer Singh and Alia Bhatt in a still from the film.

New Delhi: As soon as Ranveer Singh and Alia Bhatt starrer 'Gully Boy' gets selected as India's official entry to the 92nd Oscar Awards, wishes from a lot of people from the Bollywood fraternity poured in for the entire team for the feat.

Expressing happiness over the film's selection in the Oscars 2020, filmmaker Karan Johar beamed with joy and tweeted, "My absolute favourite film of the year is the official Indian entry for the OSCARS!!!! #GullyBoy all the way! Zoya Akhtar is my favourite Indian filmmaker! Well done boys @FarOutAkhtar @ritesh_sid get the gold statue home!!! So excited !! Alia Bhatt, Ranveer Singh and the team!"

My absolute favourite film of the year is the official Indian entry for the OSCARS!!!! #GullyBoy all the way! Zoya Akhtar is my favourite Indian filmmaker! Well done boys @FarOutAkhtar @ritesh_sid get the gold statue home!!! So excited !! @aliaa08 @RanveerOfficial and the team!

Elated by the news, actor Anil Kapoor congratulated the entire team on his Instagram story. "Congratulations Zoya Akhtar and team Gully Boy. This is just incredible!!" he wrote. 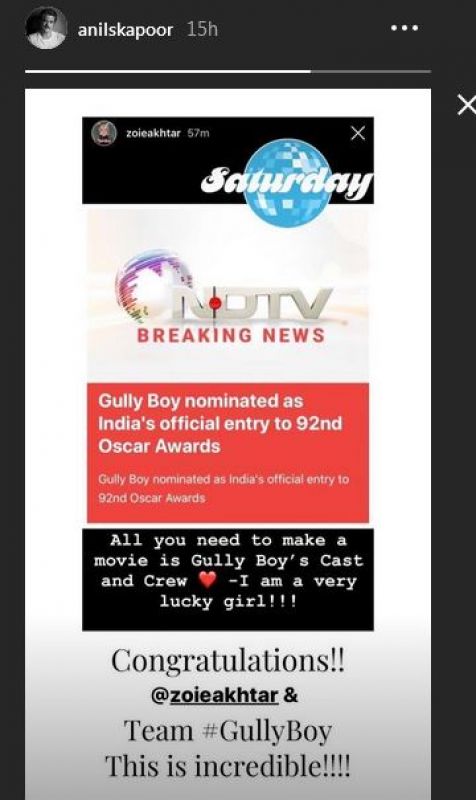 "This is so awesome!!! Congratulations team Gully Boy. Go get that Oscar," wrote Dia Mirza on her Instagram story while expressing excitement over the announcement. 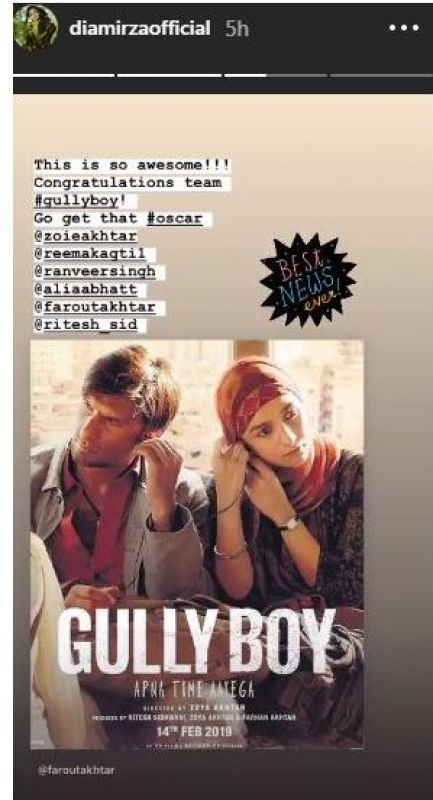 Swara Bhaskar too congratulated the team while reposting the tweet of Farhan Akhtar. "Wooooohoooooo!!! Congratulations to Team #GullyBoy," she wrote along with several whistling emojis.

Another filmmaker Shashank Khaitan who is known for directing films like 'Humpty Sharma ki Dulhaniya,' 'Dhadak' and many more, considered the film as the right choice for the Oscars. "Wow wow wow... absolutely the right choice... #apnaoscaraayega ... all the best team #GullyBoy," he wrote while reposting the tweet by Ranveer.

The story of the flick revolves around Murad (Ranveer), an underdog, who struggles to convey his views on social issues and life in Dharavi through rapping. His life changes drastically when he meets a local rapper, Shrikant alias MC Sher.

The film has received a number of accolades including the NETPAC Award for Best Asian Film at the Bucheon International Fantastic Film Festival, South Korea; and Best Film at the Indian Festival of Melbourne in August this year.