Here's the first look of Diljit Dosanjh as a Punjabi superhero!

Diljit was last seen in 'Phillauri'.

Mumbai: Diljit Dosanjh is one of the fortunate actors to be accepted by the film industry in a short time span.

While most of the actors are taking up reality shows as judges, some people thought it was too early for a newbie like Diljit to judge a singing reality show.

However, he has mesmerised everyone with his outstanding acting skills and talent in his debut Bollywood film ‘Udta Punjab,’ alongside Shahid Kapoor and Kareena Kapoor Khan.

His other film ‘Phillauri’ with Anushka Sharma garnered mixed reviews.

However, this Jatt is back with his Punjabi superhero film ‘Super Singh’.

The actor took to Twitter to unveil his Punjabi film’s poster. 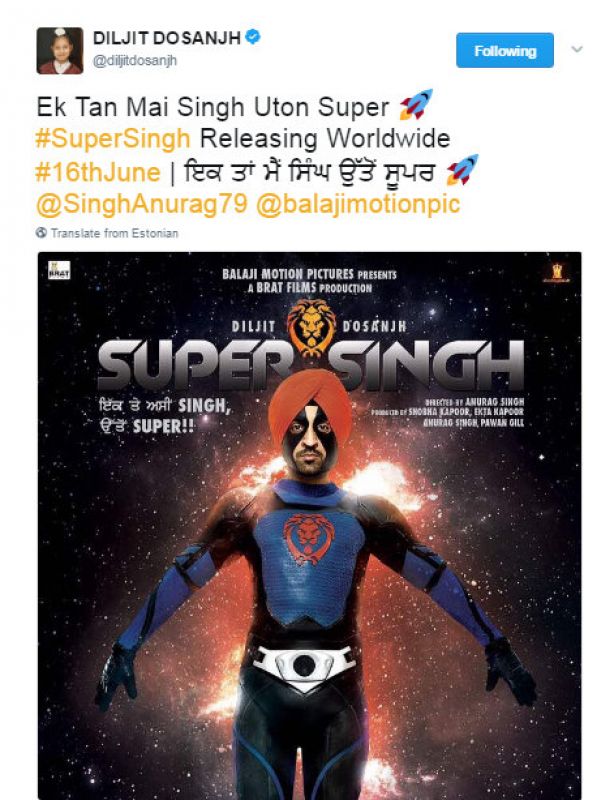 Produced by Balaji Motion Pictures and Bratt Films Production, this movie is directed by Anurag Singh. The movie also stars Sonam Bajwa in the lead role.

The recently released Bollywood superhero film ‘A Flying Jatt,’ where Tiger Shroff had played a Punjabi superhero himself, failed to impress the audience.

'Super Singh' is slated to release on June 16.

It remains to be seen if Diljit manages to charm the audience with his superhero skills.

■After Tiger Shroff, Diljit Dosanjh to play a Punjabi superhero