The posters of 'Jagga Jasoos' and 'Sarkar 3.'

Mumbai: Some big clashes at the box office have made headlines in recent times like ‘Raees’ versus ‘Kaabil’ and ‘Rustom’ versus ‘Mohenjo Daro’ and another such clash was set to take place on April 7 when ‘Jagga Jasoos’ and ‘Sarkar 3’ were set to release together.

While the makers of the Ranbir Kapoor-Katrina Kaif starrer were the first to announce the release date and reveal the trailer, reports of the film releasing during June-July and even late 2017 have been doing the rounds.

And while ‘Sarkar 3’ could have thus enjoyed a solo run at the box office, the Amitabh Bachchan starrer has also got postponed now.

The distributors of the film, Eros International, announced the news on Twitter on Tuesday saying that the film has been pushed to May 12 now owing to a delay in post production work. 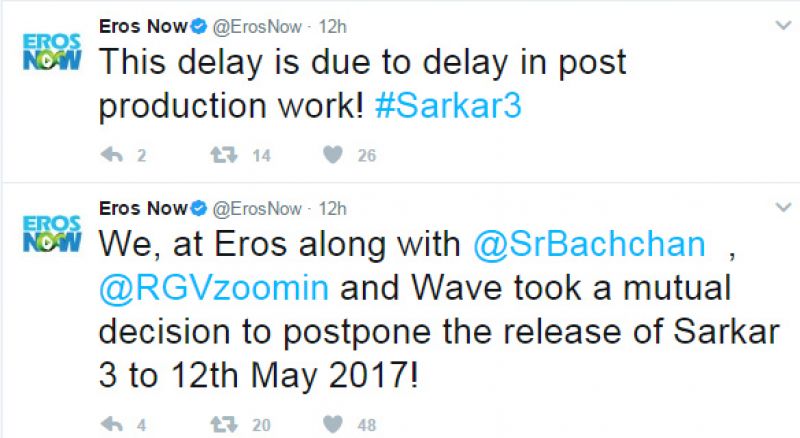 The film would still not get a solo release then as it would then clash with Ayushmann Khurrana-Parineeti Chopra starrer ‘Meri Pyaari Bindu.’