When exes Abhishek, Karisma attended the same wedding, Shweta posed with the actress

Mumbai: Bollywood is such a busy place that is a common sight for celebrities who don’t see eye to eye to be invited to the same event.

Many a time, celebrities skip an event when they know people who could make them uncomfortable are sure to grace it. And when that’s not possible, everything from entry to exit and timing at the particular event is strategised to ensure that there are no awkward encounters.

Though they might not have encountered each other, Abhishek Bachchan and Karisma Kapoor were both present at the recent wedding of Mohit Marwah in UAE.

For the unversed, the ‘Haan Maine Bhi Pyaar Kiya’ co-stars, rumoured to be dating for five years then, were engaged more than 15 years ago, before calling off the engagement few months later in 2002.

Later, Karisma married businessman Sanjay Kapur the next year, separated and got divorced from him last year, while Abhishek is happily married to Aishwarya Rai Bachchan for a decade.

Abhishek’s presence at the event was confirmed in a lovely picture shared by Sonam Kapoor on Instagram where the ‘Delhi-6’ co-stars are posing with the latter’s boyfriend Anand Ahuja, former’s sister Shweta Bachchan Nanda, Karan Johar and Aarti Shetty.

That’s not all, Shweta even posed with Karisma in a picture with Arjun Kapoor, Athiya Shetty and Manish Malhotra shared by the fashion designer. 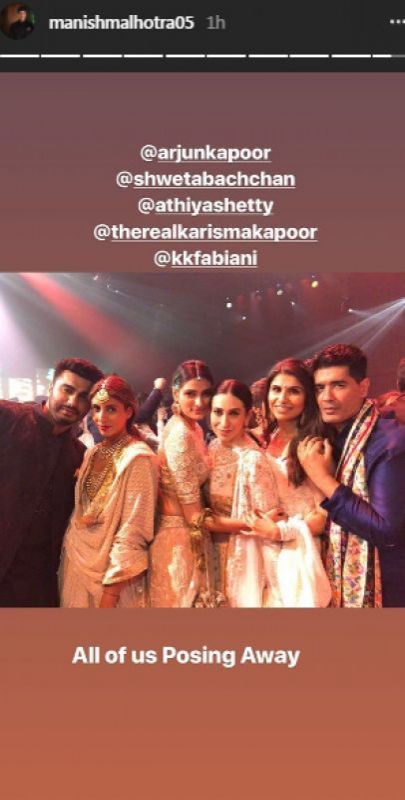 Any plan to avoid any awkwardness definitely failed in this case, or else it’s possible that Abhishek landed late after Karisma left, as he wasn’t spotted in any other picture from the Sangeet or other ceremonies.

Unlike Kareena Kapoor Khan and Shahid Kapoor doing the same film ‘Udta Punjab’, or Hrithik Roshan and Sussanne Khan still bonding, some exes in the film industry can only cross paths to this extent.